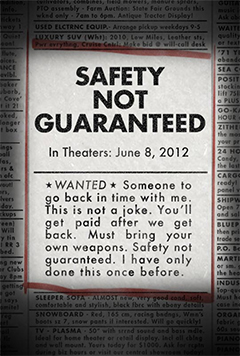 With the abundance of reboots and sequels floating around, it’s hard to find an original idea in Hollywood. Inspiration can be found in the strangest of places and this film has a little classified ad from the late nineties to thank for its existence. One might not expect much from Colin Trevorrow’s Safety Not Guaranteed, but it’s a touching film that that surprises and pleases, regardless of its odd origins.

Aubrey Plaza stars as Darius, a college graduate interning at a magazine who can’t seem to catch a break. One of the writers, Jeff, proposes to investigate a classified ad that reads:

“WANTED: Someone to go back in time with me. This is not a joke. You’ll get paid after we get back. Must bring your own weapons. I have only done this once before. SAFETY NOT GUARANTEED.”

Once approved, Jeff selects Darius and another intern to accompany him in this investigation. They quickly discover that the man behind the ad is Kenneth Calloway, and after Jeff’s failed attempts at contacting him, Darius is sent in to pose as an applicant for Kenneth’s time travel ad. Initially playing a role, Darius finds herself bonding with Kenneth as their days of training and talking bring them closer together.

While Safety Not Guaranteed has the sci-fi element of time travel, it has basically nothing to do with your standard Back to the Future scenario. Instead, it focuses on people and their longing to fill voids in their life. Each of the main characters is trying to find what’s missing in their life, whether it’s a companion or simply a reason to keep getting up every day. Derek Connolly’s writing offers a balance of humor and drama that works to enhance this sense of longing and questioning embedded in the film, while delivering a heart-warming story that will leave you smiling throughout.

Not all is great about Connolly’s writing though as some jokes fall flat towards the start of the film. One of the supporting characters in particular, the Indian nerd played by Karan Soni, serves mostly to provide humor based on the trite nerdy stereotypes. Most, if not all, of the writing for him seems lazy, but as his character is slowly pushed into the background and the others are further explored, the movie works past this unfortunate flaw.

Colin Trevorrow’s direction for Safety Not Guaranteed really brings Connolly’s writing to life, creating a far more aesthetically pleasing film than many of the low budget films showcased at Sundance.  It boasts some beautiful photography courtesy of cinematographer Benjamin Kasulke, along with a minimalist score by Ryan Miller that is sure to entrance audiences. In addition to his score, Miller penned a touching little song for the film titled Big Machine, performed in-film by Mark Duplass.

If not for Mark Duplass and Aubrey Plaza’s performances and chemistry, it’s hard to believe that this film would be anywhere near as successful as it is. Duplass has already proven he’s a good director alongside his brother, but his work here proves he’s an even more talented actor. As for Plaza, who many complain always plays the same role, Safety shows just how well she’s doing outside of her Parks and Recreation work. Her entertaining bit role in Scott Pilgrim vs. the World may not have proven much, but this performance solidifies her as a very promising star.

Low budget flicks don’t always fare well, but Safety Not Guaranteed has a lot of heart and a talented crew that takes it further than one would ever expect. Despite its flaws, Trevorrow’s touching debut leaves one with the hope that time travel might not be as impossible as they say.