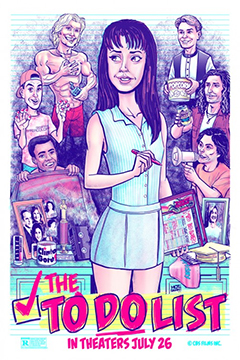 Let’s talk about sex, baby. You all know that glorious Salt-N-Pepa song (and if you don’t, please get educated [x]) and I’m willing to bet that writer-director Maggie Carey loves it just as much as I do. The reason I bring it up isn’t just because it’s in her feature debut The To-Do List, but more so because it’s the perfect example of what the film is (almost) all about.

Just like Salt-N-Pepa, Carey’s flick dives right on into all the good things and the bad things that can be through Aubrey Plaza’s sexually inexperienced high school grad Brandy. Her usual deadpan delivery works hand in hand with the studious personality she’s been written, and it only gets better the more fed up she gets with the men around her. Once armed with a self-studied list of “jobs” to explore, the line of men waiting to dive in her pool (though not the one she works at) keeps growing. And boy does The To-Do List love showing off its men, especially Scott Porter, whose body the camera exploits time and time again. Of course, objectifying the guy wouldn’t be quite as much fun without throwing in a few jokes, and saying he “feel[s] like Marky Mark looks,” is exactly the right route to take.

As much playful late-80s and early 90s pop culture humor is thrown in, there’s also a crude touch to the comedy. Some works — Connie Britton’s forwardness about lube especially — and some doesn’t. It’s actually surprising how much of the physical comedy during each sexual experience works even if a good chunk falls flat, but it’s all about the ensemble cast. The gang does wonders with the biting dialogue, fights between sisters and dick talk providing some of the best bits.

The To-Do List loves sex, but it’s also clear it loves its characters, especially the two best friends Plaza is joined by. Alia Shawkat and Sarah Steele, both delightful as ever, make the friendship feel all too real. Who hasn’t been excited to watch Beaches with their girlfriends? A lot of people probably, but these gals (and I) love it. As predictable as the idea of picking your friends over your bang buddies is, there’s something all too refreshing at play here. And that’s sexual liberation.

Maggie Carey’s first film may not have made the splash it should have, but it’s definitely a refreshing comedy made by a woman who gets sex. Through this young woman in control of her own sexuality, she shows that having sex isn’t really all that big a deal; the feelings that come with it are the rough part. But the young can easily get over those sexual and emotional fumbles. Like Brandy says, “Teenagers don’t have regrets. That’s for your thirties.”