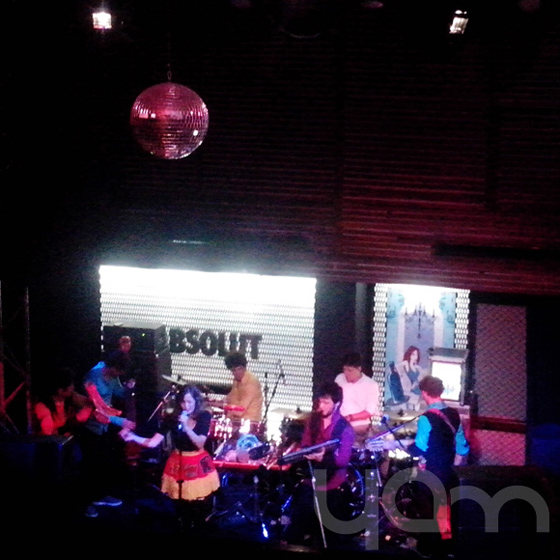 It’s tough not to fall in love (or feel good) with Monsieur Periné’s catchy, romantic and fun-breezing music. Hearing them live just makes you love them even more.

Like I mentioned to Catalina García (the singer), Hecho a Mano is one of my favorite albums from 2012, and everyone whom I made listen to the band has at least either fallen in love with the album… or at least liked a song.

Monsieur Periné’s show was originally programmed to take place at El Dragón de Barranco, but news regarding the date of ticket purchases (and prices) for the performance was 100% unavailable until March 31st, which led to the concert being held at Bizarro Bar at Miraflores (w/capacity for 300 people approximately) instead, and fans buying tickets at the very last minute. Not a good concert organization at all. Anyways, the concert’s new location was great for me and my friends, considering we were hungry and we had the Calle de las Pizzas nearby. One thing I’ll also remember for the rest of my life: eat fresh pizza with chimichurri.

Place was pretty crowded (it comes with concerts being held at small venues) and when La Mesié took over the stage, people cheered a lot, especially when Catalina showed up because that was code for the show to start. Things kicked off with La Tienda de Sombreros (preceded by a nice flute solo by Camilo) and everyone had a smile on their faces, but everyone sang loud and happy when Suin Romanticón played. Highlights included the use of several instruments during the show, Catalina being a wonderful vocal presence live, a guest duet by Peruvian pop singer Pamela Rodriguez during Sabor a Mi, the band doing a Louis Armstrong rendition, La Muerte live and a few other moments that I can’t remember. It was a fun night for everyone in attendance thanks to the great music played by these talented folks.

Despite the lack of organization surrounding the event, the news surrounding the Chilean earthquake was a downer and much worse than anything that could have happened last night. The tsunami alerts put several countries on notice and the Miraflores district is near the coast. While Bizarro Bar isn’t close to the sea, it would have required a NatGeo mega wave to wipe us out. So even if something bad would have happened during the show, at least those in attendance would have died in musical heaven with La Muerte.

for the interview we had with Monsieur Periné before the gig.