There’s always a first time for something. And in my case, I finally got to do an interview for the first time.

I got the chance to interview Colombian band Monsieur Periné hours before their concert in Lima last week. However, I wasn’t alone in this interview, so there are parts of the conversation that cannot be transcribed here due to mutual respect for the other interviewer who did not recorded the parts in which I spoke to the band. By the way, I ended up talking mostly to singer Catalina García during the interview. 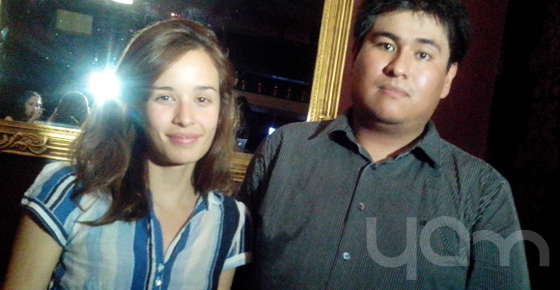 Sorry, Camilo Parra (before the interview happened, I talked with him briefly about subjects like travelling around South America and their recent gig at Lollapalooza Chile 2014).

First of all, congratulations on your album Hecho a Mano. It was one of my favourite albums of 2012.

And I see that it’s the first time that you play in Peru in front of an open audience.

You played here before for private events, if I’m not mistaken.

Yes, we played. We had an open show in a market, a restaurant, in a market two years ago. But let’s say it was open for the restaurant’s audience.

Not many people found out about it.

I found out about Hecho A Mano through my friend Amy, who is the editor of the magazine, and she also interviewed one of your friends, Esteman. [1] I know you get along well with him and you have in common the same style of music and the love for languages.

Yes. We did music with him.

If I’m not mistaken, you guys did True Love with him…

… which is part of his first album. What can you tell me about your relationship with Esteman?

About our relationship with Esteban? Nothing. It’s a relationship of admiration, respect, collaboration. We are part of the same generation of music, so we understand each other very well and we get along very well.