How I Met Disappointment, or: Why the HIMYM Finale Sucked. 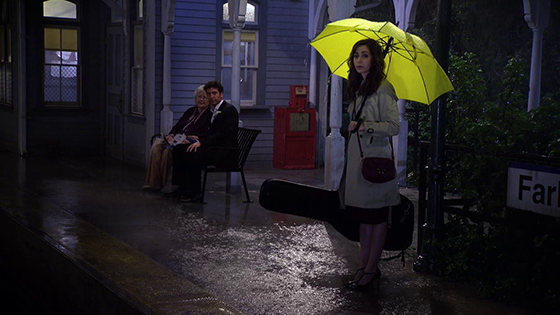 The following contains a mountain of spoilers.

Just over halfway through Pt. 2 of How I Met Your Mother‘s grand finale, Last Forever, Marshall turns to some youths and says, “Do you have any idea what happened right here in this very bar?” The kids, probably wondering why the fuck some asshole is talking to them while they’re trying to chat and drink, respond, “No. What happened?” Marshall laughs, and his face quickly turns from a half-hearted smile to something just plain heart-breaking. “Just… all kinds of stuff.”

He’s right. There has been all kinds of stuff. A hell of a lot of good, a hell of a lot of bad, and more in between than I wish I had dealt with over nine years. That weird feeling of loving nostalgia for the people sitting around you and all the great stuff you did fades away when you come to the realization of how much time has gone by with, and without them. You start to feel a little resentment that things didn’t always turn out the way you wanted them. But, for me, for someone who always saw more than what the characters themselves saw, there’s more than a little resentment in watching this finale. There’s bitterness.

Imagine where we’d be if Ted had said that and the show just cut to black for forty minutes. That’d be cool, huh? To think of the days when that reveal was the most nonsensical thing happening on television. Well, if there’s one thing I can say about Carter Bays and Craig Thomas, it’s that they basically led up to this moment with the subtlety of a wrecking ball. To sum things up for those of you lucky few who are reading this without watching the recent episodes or seasons of How I Met Your Mother, and are just plain and simply curious to know why I’m mad. The entire ninth season of HIMYM has (mostly) taken place around the weekend of Barney and Robin’s wedding. It was, arguably, not an altogether awful idea. In fact, there were a lot of pleasant little moments shoved into those forty eight hours spread over basically twenty-two episodes. There was also a lot of Ted managing to grow up as a human being, some more building of Lily and Marshall’s relationship, but none of that was quite important as, y’know, the wedding the whole season was centered around.

As much as I had grown to loathe the relationship between the two in season eight, due to what basically amounts to a ton of lies and bullshit masquerading as something romance, this season sort of started to make things look up a little (regardless of a whole lot of Ted/Robin nonsense). Everyone thought we were in the clear the moment the two got married. After all, it took an entire season to get them married. A season of fights, near-splits, near-runaways, regrets… uh, I guess it wasn’t looking all that good throughout this season. But, it happened. They got married. Barney and Robin were a couple, and for just a week, one beautiful week, I thought that Robin (arguably my favorite character in the entire series, who Bays and Thomas have abused more than I can bear to withstand over the years) was finally going to be happy.

I was wrong. Horribly wrong.

Barney and Robin get divorced. Three years after they get married. How is that possible? Easy: Bays and Thomas decide to cover over a decade within the span of forty minutes — an embarrassing decision considering they spent twenty-two episodes on one weekend. Not only that, but Robin is essentially the one to blame for the divorce. She’s too distant. She’s traveling because of her career. That’s it. That’s all they give us before moving on to the one crutch that the show has never been able to let go: Ted & Robin.

It is with the frustrating realization that, barely a minute after Ted & The Mother are married (yes, they do get married on the show), she is sentence to death by illness.  We find ourselves back at the very beginning, with Ted telling his kids the story of how he met their mother. Except, as the kids point out in a moment where the show yet again throws in some self-awareness, it wasn’t at all about how he met their mother. Woah! What was the show about? It was about Robin. So why, then, is it that Robin is always at the short end of the stick? Why is it that Robin is the one who has to disappear out of everyone’s life instead of Ted? Why did Ted get to spend over a decade happy with someone else while Robin wallowed in self-pity and work? Why did Bays/Thomas have so many episodes that emphasized how important their friendship was over their romance? Why did we receive closure to their relationship only to have it throw out the window in a mere forty minutes? Why dispose of a smart, funny, adorable young woman after getting to know her and having her interact with this group of friends in a manner of seconds? With not even the dignity to give her more exposure than this awkward episode, trying to cover more ground in forty minutes than it did in its entire existence? Why give her a name to kill her minutes later? To sacrifice her only to emphasize some sort of warped When Harry Met Sally style romance between two people who, as we’d been told for nine years straight, needed each other’s friendship more than they ever needed to be in love?

If this finale really tells me anything, it’s that Carter Bays and Craig Thomas had no interest in the relationships they’d built over the years. The sanctity of Marshall and Lily, of course, remains intact, but as for everyone else, who cares! They, and we, deserved better. Tracy McConnell deserved more dignity than death after a name reveal and a wedding, Robin deserved more than years of loneliness, and even Barney, as despicable as he was sometimes, deserved better than a surprise pregnancy and child that barely gets addressed. We don’t even know how much Barney was in his own child’s life, something that I find particularly baffling considering how much time was dedicated to showing how much not having a father in his life took a toll on him over the years. But Ted gets the girl. He gets the kids. He gets everything he ever wanted, including the one that got away. The one that never should have been his. The one he felt he had some sort of right to, but finally came to accept that she was better off with another.

It’s with those last minutes of How I Met Your Mother that every bit of character development for both Ted and Robin was just thrown away. It was a slap to the face for everyone who ever bothered to care. It was Major Bullshit (insert hand gesture and word repetition here), and an attempt to wrap things up neatly. Do I regret all the good I got over the long time I watched? Not at all. And yet, as happy as it made me to see Ted and Tracy’s actual first meeting, under that tiny little yellow umbrella in the pouring rain, and as happy as many of the moments I’ve had over these nine years have made me, it is with bitterness that I bid farewell to this show. It left me, not with a Bang Bang Bangity Bang of delight, but feeling like I just got slapped. Yes, that really just happened. Everybody saw it. But nobody laughed and clapped. Because it wasn’t awesome. It sucked.