More stuff out of the Star Wars: The Force Awakens 3D Blu-ray Collector’s Edition! Here’s a deleted scene pits where Unkar Plutt managed to follow Rey et al to Maz Kanata’s fortress bar. Crazy dude even has the gall to trash talk to freaking Chewbacca. The clip is short, and I don’t know if they filmed the whole scene, but the novelization actually features what happens next. Remember what Han said in reference to upsetting Wookiees to 3PO and R2 when they were playing Dejarik in the original Star Wars movie? Yep, Plutt got, ahem, disarmed.

Check out this cute trailer for the original graphic novel Squirrel Girl Beats Up The Marvel Universe. Yep, it is the same creative team behind the comic series The Unbeatable Squirrel Girl, with writer Ryan North and artist Erica Henderson.

Here’s the a new Doctor Strange clip, where the titular character’s astral form gets punched out of him by The Ancient One for being disrespectful~ Yep, “show, don’t tell” works better in those cases!

On related news, damn, those first reactions to Doctor Strange have been fantastic! Benedict Cumberbatch, the visual effects and even the 3D get praised. And they also confirmed there will be two post-credits scenes!

It’s poster time! First, here’s the new Assassin’s Creed one where past and present are shown, with the profile of Michael Fassbender’s characters, Callum Lynch and his ancestor, Aguilar. Also, there’s this bad-ass Guardians Of The Galaxy Vol. 2 poster, where  not only the good guys are depicted but Nebula (Karen Gillan) and Yondu (Michael Rooker) too! Baby Groot remains the cutest thing ever, “obviously”, which is the new tag-line after the “you’re welcome” from the first film. 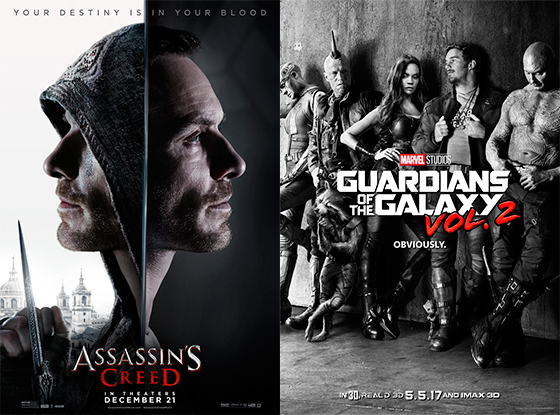 For all of those who complain about reshoots in Rogue One: A Star Wars Story, more J.J. Abrams commentary reveals a couple of my favourite scenes in Star Wars: The Force Awakens where reshoots, so ha! Yep, Finn and Rey’s meet-cute was way different in a way that wasn’t working, what with Finn revealing instantly he was a Stormtrooper and Rey not knowing who Luke Skywalker. Yeah, nope! Another one is the Kylo Ren and Rey fight, where a couple of shots were added. One the perfect moment where Rey feels the Force and accepts it in order to kick his ass, and the other a quick shot of her face in all its intensity while fighting back… and that one was actually a suggestion by director Ava DuVernay!

It’s been a decade since we had a new Tolkien book. Which is really strange to say considering the Professor passed away a long time ago. But yep, we are getting a new book, Beren and Lúthien, in 2017, that is 100 years after Tolkien first wrote it. HarperCollins will be republishing the story, along with other excerpts related to it and previous drafts. As with all of Tolkien’s posthumous publications, the book is edited by Tolkien’s third son, Christopher Tolkien. The book will also feature illustrations by Alan Lee.