The Fangirly Diary of a Geek Girl: Rise of the Siren Genius~

Greetings, fellow fangirls and fanboys! This past week we had some blasts from past, come-backs, casting news, and villains! From comicbook inspired TV series that I enjoy quite a bit~ Here’s how the week started:

Troll King Steven Moffat gave us some teeny tiny clues about the Victorian-era Sherlock special. Like the time traveling won’t be explained, there may be ghosts, John Watson will be more uptight, and Sherlock Holmes less of an a-hole~

Sherlock is a little more polished. He operates like a Victorian gentleman instead of a posh, rude man. He’s a lot less brattish.

It’s been a year since Guardians of the Galaxy premiered in the US. James Gunn got sentimental and wrote a very nice thank you to the fans on Facebook~ Here’s the last bit:

Here’s the teaser trailer of Digimon Adventure Tri, where it seems we will get at least three new characters! The “Butterfly” song still gives me the feels~

Colin Trevorrow may not direct the Jurassic World sequel, but dude sure is writing it and wants to share some plot seeds:

[It will not be] just a bunch of dinosaurs chasing people on an island. That’ll get old real fast. I feel like the idea that this isn’t always going to be limited to theme parks, and there are applications for this science that reach far beyond entertainment. […] And Dr Wu says in the film, when he’s warning Dr Mesrani, ‘we’re not always going to be the only ones who can make a dinosaur’.

Bryan Singer’s Instagram game for X-Men: Apocalypse has been on point. Here’s another exhibit showing Storm in her badass mohawk watching over 1983’s Cairo! 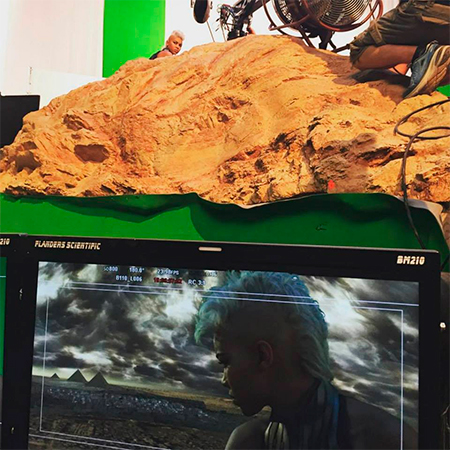 Mark Ruffalo has been partying with both Chris Evans, Anthony Mackie and Daniel Brühl in Berlin, where they have been filming Captain America: Civil War. Apparently that’s confirmation enough that Ruffalo will be in that movie like everyone else but Thor~

Also, we know that Peter Parker will be in the movie (like I said, like everyone else but Thor), but Spidey will have more screen-time. That is Holland will be for a few moments, but hey anybody can wear that mask. Like some stunt double jumping around having badass yet dorky fight scenes!

Spider-Man doesn’t just swing by and say hi – gets his hands dirty in this Civil War. He fights. And his fight scene might be the one that really gets fandom excited – not because of how top tier the face-off will be, but because of how profoundly dorky and unlike any other big screen superhero fight it will be.

So, who would you think Stan Lee support? Batman or Superman?

Superman, I think. He’s indestructible, he can do anything. And Batman relies on a few weapons…But if this were real–a fight between Superman and Batman–there’s no way that Batman could win.

OMG! Nichelle Nichols (you know, Star Trek original series Uhura) will be flying in a NASA Observatory Mission this September. Can this woman be even more badass?

I am honored to say that I will be among the first non-essential personnel to experience NASA’s newest telescope: SOFIA. On September 15th, I’ll board a special 747 with a very specially built telescope integrated into the fuselage, taking off at NASA Armstrong Flight Research Center near Palmdale, California.