Greetings, fellow fangirls and fanboys! This week Daredevil premiered, other geeky TV series get promos and new seasons, and we have our first (weird) pictures of Star Wars: Episode VIII set pictures. Here’s how the week started:

It’s time to compare our big comicbook movies of superheroes fighting each other with other awesome non-comicbook movies! First, Batfleck likens Batman’s introduction in Batman V Superman: Dawn of Justice to Se7en and Aliens. Eh, if you say so!

[On Batman’s introduction in the movie] It’s like out of “Se7en” or “Aliens” or something, which is a really different vibe. My son still watches the Adam West “Batman” [TV series]. It’s a far cry from where it started.

On more DC news, the solo films of Aquaman and The Flash won’t be origin stories. According to producer Charles Roven, “while each movie stands alone, they’re all part of one long arc of storytelling”, and apparently both Ezra Miller (The Flash) and Jason Momoa (Aquaman) will make brief appearances in Batman V Superman: Dawn of Justice and so their respective story arcs will move forward.

It seems that the Xena: Warriro Princess reboot series should turn homoerotic subtext into homoerotic plain text, according to pilot writer Javier Grillo-Marxuach~

There is no reason to bring back Xena if it is not there for the purpose of fully exploring a relationship that could only be shown subtextually in first-run syndication in the 1990s. It will also express my view of the world – which is only further informed by what is happening right now – and is not too difficult to know what that is if you do some digging.

It still takes place in the same world. I think the Danny Rand character himself will have a different perspective on the world than some of the characters that you’re seeing now — as will Luke Cage. I mean you guys haven’t seen that show yet, either. Our goal is to provide four different shows that each have their own feel while, again, feeling like they are a part of a whole. Not an easy task, but I can tell you that our team is really fantastic at doing this.

We get our first clip from Teenage Mutant Ninja Turtles: Out of the Shadows, during the Kid’s Choice Awards. It was basically the Turtles in hot pursuit driving the Party Wagon:

Mark Hamill tweeted the first look of Batman: The Killing Joke animated movie where he plays, who else, The Joker. It was tweeted three times, each time with a quote from the comicbook, and the first word spelling out “THE KILLING JOKE”. 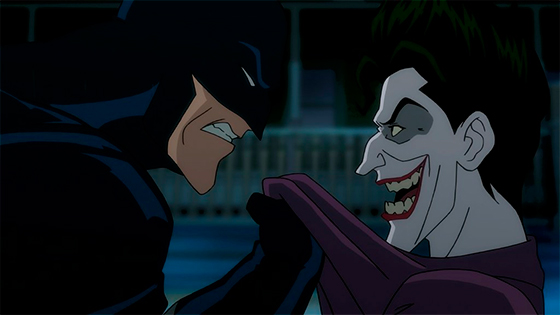 Talking about first look, this is a non-official one of Star Wars: Episode VIII! These on-set photos showed landspeeders, new aliens and some of them were quite dapper with tuxedos and fancy shoes!