Vikings got renewed for a 20-episode Season 5 at History! Also, Jonathan Rhys Meyers has joined the cast after “his incredible performance in our upcoming production of Roots“, also at History.

Empire Magazine sure likes to have interesting covers! This time, heroes and villains assemble on 9 interlocking covers for X-Men: Apocalypse! Sure, not all of them work perfectly individually, but the altogether looks cool:

The Russo Brothers said that Spider-Man “enters [Captain America: Civil War‘s]story after the conflict that is happening between the Avengers and that gives him a very unique place in the story”. Also, they all love the costume they’ve chosen for our friendly neighbor, so they hope you dig it, but they won’t lose any sleep in you don’t ’cause they were true to themselves and stuff~

The design of the costume is what it is. That’s the design that we love, it’s the design that Kevin Feige loves and so on. He’s a very popular character so it’s always going to be controversial, people are always going to love or hate what you do with him, but all we can do is make sure that we love it, that we are true to ourselves and true to how we feel about the character and then hope that everybody else digs it. And there is still effects work that needs to be done on it.

A couple of teaser images revealed who’s on each side in Civil War II… which is basically a comicbook fight about the plot of Minority Report. Yep, those who want to use the power of “predictive justice” to stop criminals before they act are Team Captain Marvel, and those who believe that justice should only be served in the aftermath are Team Iron Man. Yes, the premise looks kinda dumb, but I will still read it before reaching a conclusion. 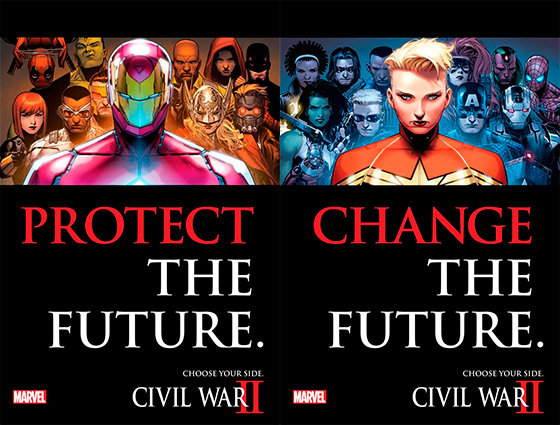 Gal Gadot shared a fantastic new image of Wonder Woman via Twitter, which could be from her solo movie or from Batman v Superman: Dawn of Justice:

Remember those awesome “one-shots” Marvel used to put in their MCU DVDs/Blu-rays? Well, they might make a comeback on YouTube (or some other social media platform)! The Russo Brothers, directors of upcoming films Captain America: Civil War and Avengers: Infinity War, had this idea of shooting more scenes that take place within the world of Infinity War and turn them into sorta, kinda short films!

It can make money by creating anticipation for a movie in the same way that a trailer does. There could do more elaborate versions of trailers, for instance, that are shot specifically for online that will never appear in the movie but that may appear as a kind of short film.

Here are the last posters for Daredevil Season 2 before its debut. And they look quite violent. Specially that first one! Damn, Matt Murdock, chill a bit, why don’t you! 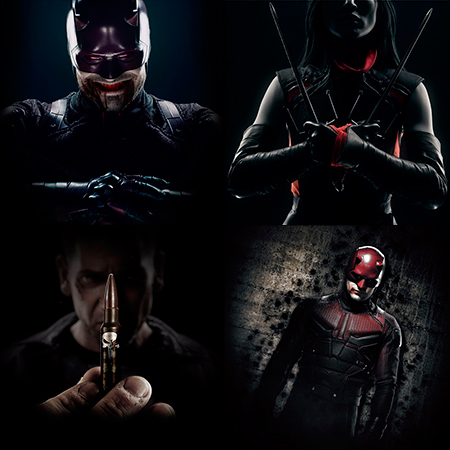 After you watch all of Daredevil Season 2, you get a treat: a teaser of Marvel’s Luke Cage. Or, if you don’t have Netflix or just can’t wait to finish Daredevil to watch it, you can find it all over the internet! BTW, Luke Cage’ sickness of always having to buy new clothes has been duly noted.

The last news of the week comes also from Netflix. Seems that the poor filmgoers of US of A will miss watching the beautiful movie The Little Prince on the big screen. For some reason, Paramount Pictures decided to drop it from the slate. But hey, at least you’ll get to watch it on Netflix! There’s no exact date of its debut, but it should be this year definitely! So thanks forr that, Netflix!

–
And that’s it for the week. Before I go, I want to wish Happy Birthday to Jaimie Alexander, Aaron Eckhart, Michael Caine and John Boyega.