The Fangirly Diary of a Geek Girl: Of advertisements and animation~

Greetings, my fellow geeks. The week, besides the Golden Globes and Hiddles about to do some good, I saw a couple of my favs doing ads and lots of animation news, be it mainstream, indie, or even fan-made. The geekiness didn’t stop, though.

So, you know how every director keeps saying “no thanks” to the new Star Wars trilogy? Joss Whedon would have loved to say “yes”, but he’s busy with Marvel stuff, like S.H.I.E.L.D. and especially The Avengers sequel.

I’m as angry as you should be. When I heard that I was like, ‘I wonder… no, I really can’t do that. Oh, I already have a job.’ I wouldn’t clear The Avengers. I’m having so much fun with that sequel right now, just with the script, that I couldn’t imagine not doing it.

You know what time it is? Concept art time! Here’s Andrei Riabovitchev’s work (who also did some concept art for Snow White and the Huntsman) for X-Men: First Class. I prefer his version of Havok and his Beast is so-so, but damn his Sebastian Shaw looks way more creepy!

So, Ron Pearlman is going to voice Sinestro in Green Lantern: The Animated Series. Yes, they finally got to use him since DC Entertainment weren’t sure how they were going to manage his story in future Green Lantern movies… of course, the movie flopped, and now the animated series can use the MOST IMPORTANT ANTAGONIST IN GREEN LANTERN UNIVERSE. I feel sad for Mark Strong, though. While I am sure Ron Pearlman does an awesome job, Strong will forever be my Sinestro in that terrible movie. Also, never forget that Hal Jordan is a pretty magical girl~

Green Lantern Power! Make Up! BTW, the video is from the Green Lantern: First Flight animated movie. The audio is, of course, from Sailor Moon.

Anyway, here’s a list of ten actors who should be considered to play the next Batman. Yeah, I am not too enthusiastic about these choices even if it contains some of my favs. The problem is that while I can easily see any of them as Batman… I cannot image them as Bruce Wayne.

J.J. Abrams talks about Star Trek Into Darkness, about how it is for a broader audience and not just for Trekkies:

The idea is to make a movie not for Star Trek fans but for movie fans, and if you’re a Star Trek fan, hopefully you’ll love it, the story works. And if you don’t care about Star Trek at all, it doesn’t matter, I don’t want to do a movie that you have to have studied the last film or anything before it to understand. But if you do know Star Trek there are references that’ll make you either nod or smile or connect with you. We definitely made it for a broader audience, but simultaneously aware and grateful for those people who really allowed this movie to get made at all, the fans of the first one.

Is one of those references that “hands touching through a glass pane” scene? Because that’s totally like Wrath of Khan. Of course, J.J. Abrams doesn’t wanna give anything away~

So, Peter Travies, director of Dredd, believes there would be a sequel (yes, please). A trilogy, in fact. Sadly, he doesn’t think he’ll direct it.

I think Alex Garland has a trilogy in his mind. I think there is a whole exciting journey in front of Dredd if Alex and Karl Urban get to take him on that journey. The future is really exciting for him. Especially in terms of going with some of the other characters from the comic book. Finding out more about where Dredd comes from. I also think its exciting, the possibilities. The first film does go all out as a visual feast. Whoever gets a chance to do the others willl take that, and make it even more exciting. I can’t wait to see it.

Oh yeah, that series based on Stephen King’s Under the Dome? It will debut on June 24 at 10pm on CBS. Lost writer Brian K. Vaughan and The Girl with the Dragon Tattoo director Niels Arden Oplev will team up for the first episode.

Fanartists are sometimes too awesome. Here’s a fan-made poster of The Hobbit: The Desolation of Smaug: 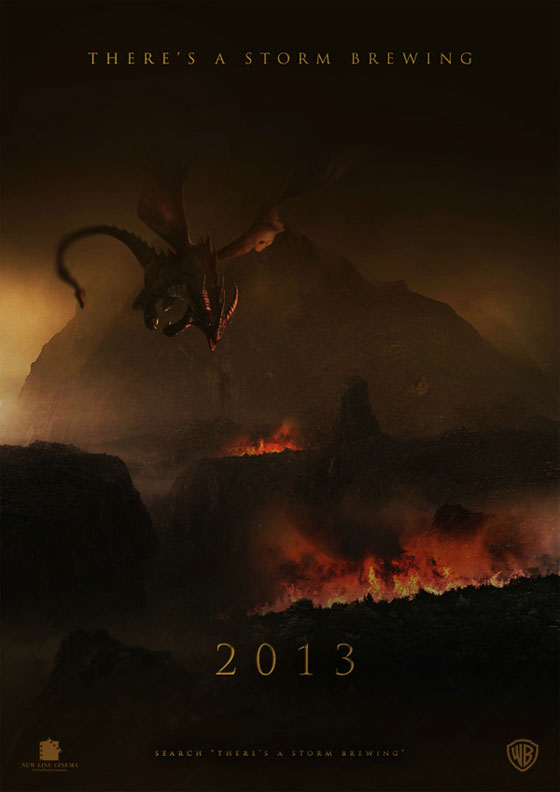