The working title for Rian Johnson’s Star Wars Episode VIII has been revealed! It’s Space Bear! So, are we getting Ewoks? Anyway, it was  Carrie Fisher who spilled the beans by tweeting the following photo of the logo (and her dog, Gary Fisher): 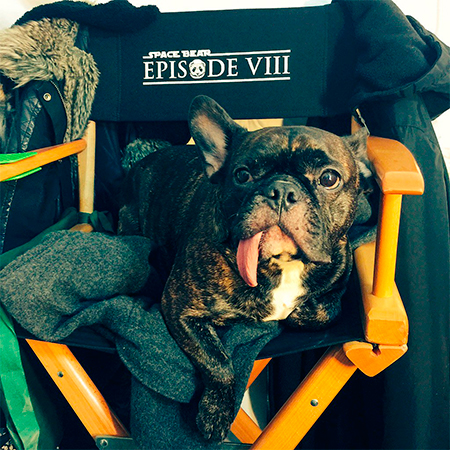 Deadpool keeps kicking ass at the Box Office! It has worldwide total of practically half a billion dollars and they didn’t even get China’s money, what with being banned and stuff.

There are some new unofficial set pictures of Doctor Strange, with give us some new looks at Benedict Cumberbatch, Chiwetel Ejiofor and Benedict Wong. So now I ask, how do Doctor Strange clothes work? It seems like The Batch has a Dorito shape, so popular thanks to Chris Evans. Is that huge belt more like a corset and that shirt is overly puffy? 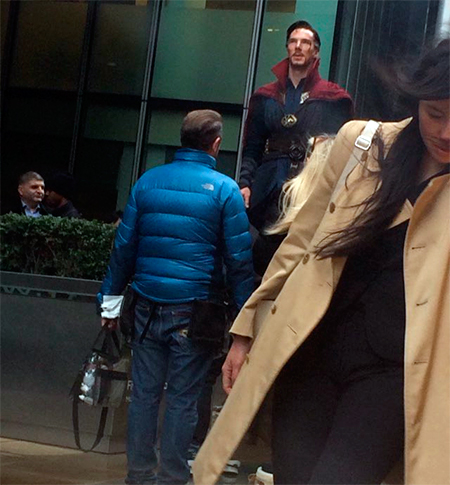 Tom Hiddleston wrote some more about The Night Manager, and once more I am surprised but how good a writer he is. That double first in Classics in Cambridge sure paid off!

Like a murmuration of starlings, the swell of public voices can change shape seemingly of its own accord, with a newly reinforced power – at times to celebrate and unify, at others to humiliate and divide. It’s a miracle that there are any secrets left. Everything is everyone’s business. Which begs the question: in today’s world, how could one possibly get away with being a spy?

Justice League — Part 1 starts filming April 11th! So about two weeks after the release of Batman v. Superman: Dawn of Justice. Just a little vacation after all the press tour, and back to work, cast members! Movie will still be released November 17th, 2017.

On Captain America: Civil War news, we finally have confirmation on Martin Freeman’s character. Yes, it is indeed Everett Ross, a supporting character associated with Black Panther who will be part of the Joint Counter Terrorist Center, or JCTC. Empire also revealed some new pictures, including a decent look at Frank Grillo’s Crossbones: 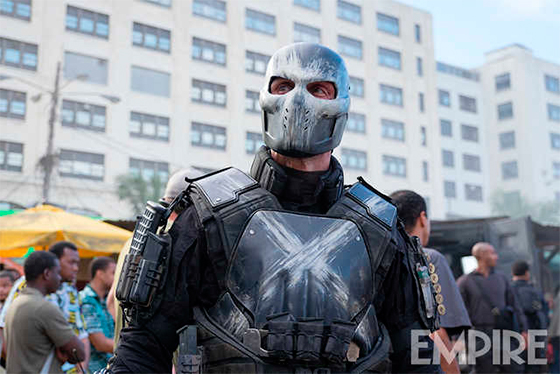 Also, Empire confirms that Gwyneth Paltrow took part in reshoots of the movie, so Pepper Potts will be back! Also, the film is called a “psychological thriller” with a “very dramatic ending that will be controversial for a lot of people”. Well, that’s for the emotional trauma, I guess!

Let’s talk abour relationships in Captain America: Civil War! First, Spidey! We have yet to see the wall-crawler, but according to Empire he appears until after the heroes have chosen their respective sides, and it’s then that Peter Parker “forms a relationship with one character”. Which character? Who knows! Also, Cap and Bucky’s relationship is described as a “love story” by director Joe Russo:

He and Steve have the emotional connection of brothers – even more so because Bucky was all Steve had growing up. Bucky was his protector, and that dynamic shifted when Steve Became Captain America, and now it has shifted again. The Cap-Bucky story is a love story; he can’t let go of his brother. He can reconcile Bucky’s crimes, but other people have no emotional context for Bucky, and they need to point the finger. We have no idea if he’s a hero or a villain. People are going to walk out arguing about that too.

Jon Bernthal seems ready to “punish” Daredevil! Marvel shared a new character poster and an interview, where Bernthal  shares The Punisher’s headspace and his relationship with Daredevil:

A big part of Matt Murdock is he needs to be one very bad day away from being Frank Castle. That’s the crux of their conflict: “You don’t know what I’ve been through. You don’t know what I’m all about. Get out of my way.” And this sort of concern for the greater good is something that I think is secondary to this man at this point. What’s interesting is you find these two characters that are so alike and so different and then when they collide, they just learn from each other. 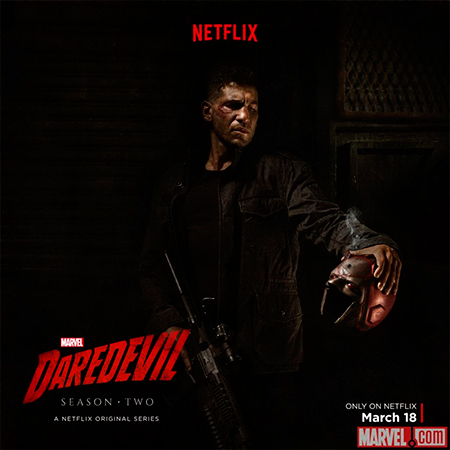