The Fangirly Diary of a Geek Girl: I am an immigrant

Star Wars Rebels comes to an end, and director Dave Filoni talked about the series finale~

I’m pretty satisfied. This is the first time I’ve been able to draw a series to a close in this manner. We had worked on different ways Clone Wars could end, but there’s a difference between having theories about how you would do something and actually executing it. These last six episodes I think are among our best, which they should be.

Social media can be used for evil, but also for good. Geeky good. Like when Mark Hamill and James Gunn might have worked out a Guardians of the Galaxy Vol 3 (or whatever it will be called) role on Twitter! #BestThread

In other comicbook movie news, we might get a Silver Surfer stand-alone movie! I mean, it’s not like he’s a favourite of mine, but it could be an interesting story. Poor guy deserved another chance after Fantastic Four: Rise Of The Silver Surfer! I hope they do it after the Disney merger tho~

M Night Shyamalan is getting a sort of renaissance, and while a possible TV series, called Wayward Pines, was cancelled, word arrives that Apple has bought an as yet untitled new show from the producer and director. According to Deadline, it’ll be a psychological thriller series with half-hour episodes that has already received a straight-to-series order for 10 instalments, with Shyamalan producing and directing the first episode to set the tone for the show.

Check out these character posters celebrating the 10-Year anniversary of the MCU! So it’s that original Groot and this is some sort of homage to that character? Or is this new Groot all grown up? 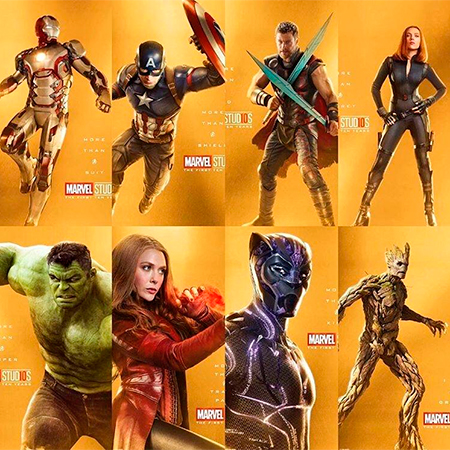 Check out the “Two Paths, One Destiny” promo for the upcoming Marvel series, Cloak and Dagger. The series is set to premiere in Freeform on June 7.