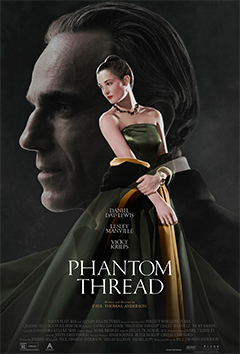 Phantom Thread is set in the British 1950s, where high-fashion dress-maker Reynolds Woodcock (Day-Lewis) is an artistic genius who runs a meticulous workshop with a small army of seamstresses, all managed by his unwavering sister Cyril (Manville). Melancholic and tantrum prone, he meets Alma (Krieps), his new muse, while on a holiday, and invites this young waitress into his life as a lover/assistant/head model. But Alma ain’t a wilting flower, and her strong personality will eventually shine through, creating conflict for the couple.

Let’s start with the most obvious thing: the acting overall was fantastic. At this point in his life, saying Daniel-Day Lewis was amazing in a film, is like saying the Pope is catholic, but as a “final performance” (you never know with showbiz people) this was a more than acceptable good-bye. He might not be as showy as some of his former performances, because Woodcock is not very overtly emotional, but he feels very strongly and it’s revealed in a full range of micro-expressions, that make the very few times he’s emoting, fantastic.

It’s hard to match with Daniel Day-Lewis, especially in some of the intense emotional scenes, but Vicky Krieps did it. I firmly believe she was robbed of that Oscar nomination. Alma’s transformation (or possibly unveiling) from her first interactions with Woodcock to her final scenes was so magnificent it almost seemed logical.

Finally we have the last of the main character, and amazing Lesley Manville as Cyril. Her relationships with both his brother and Alma were interesting to pick apart, and even when this wasn’t her story, she remained an important character that sometimes worked as a bridge and sometimes as a barrier.

Paul Thomas Anderson’s direction was as good as expected, but I almost wanted they had given him the Best Cinematography nomination instead of Best Director. Sure, he had a great control on the tone and the performances, but how everything was so greatly detailed on a technical level, added another layer to the story. It made the very few sets depicted look intimate yet grandiose.

Phantom Thread is a slow-building movie, it takes its time to show what this story is about and who’s story is this. And to get under your skin. It takes us through many plot-turns and show us this is not the typical “tortured genius and his muse” story. Dramatic, humorous and disturbing for parts, many of us didn’t expect the reveal, even if there were hints here and there.

All in all, a dysfunctional relationship has never looked so good!