Greetings, my fellow geeks! This week two of my underrated favourite series return for a second season! Yep, we have Vikings on Thorsday and Hannibal on Friday! Also there will be a TV series comeback and geeks were screaming all over the place. And other geeky stuff happened. Here’s how the week started~

Starting with the most shocking news this week, NBC will revive Heroes as a 13-episode miniseries in 2015 and will be probably called Heroes Reborn~

The enormous impact Heroes had on the television landscape when it first launched in 2006 was eye-opening. Shows with that kind of resonance don’t come around often and we thought it was time for another installment. We’re thrilled that visionary creator Tim Kring was as excited about jumping back into this show as we were and we look forward to all the new textures and layers Tim plans to add to his original concept. Until we get closer to air in 2015, the show will be appropriately shrouded in secrecy, but we won’t rule out the possibility of some of the show’s original cast members popping back in.

This is Marvel’s impact! Guardians of the Galaxy trailer increased the sales of the song ‘Hooked On a Feeling’~ The song sold more than 2,000 downloads on Wednesday (Feb. 19). I guess after the movie, the sales will increase a bit more, considering James Gunn promised us we will hear the song in the movie~

Yes, ‘Hooked On A Feeling’ is used in the movie. That and a lot of other old songs are on Quill’s mixed tape in his Sony Walkman. It’s one of the few things he has from Earth. I don’t think of it as a joke, because it’s very dear to him. It’s the umbilical cord that connects him to earth and the home and family he lost.

Wow, 12 Years a Slave (film, book, and study guide) will be distributed to public high schools in USA thanks to The National School Boards Association. Steve McQueen was very happy about it.

Since first reading 12 Years a Slave, it has been my dream that this book be taught in schools. I am immensely grateful to Montel Williams and the National School Boards Association for making this dream a reality and for sharing Solomon Northup’s story with today’s generation

On another geeky comeback, this just a rumour though, it’s been said that Farscape could return to our screens. Big screens! A website reports that Australian screenwriter and television producer, Justin Monjo was working on a Farscape screenplay.

The prolific Monjo is also writing the screenplay for Farscape, a movie spin-off of the sci-fi series that ran on the Nine Network and the Sci-Fi Channel in the US, for Jim Henson Productions, to be directed by Brian Henson.

Here’s an interesting interview with costume illustrator Keith Christensen, who was worked on many geeky movies, such as The Avengers and Man of Steel. He talks about why there’s change in the costumes in comics and in movies… should be obvious though~

I think what hardcore fans don’t realize is that they’re willing to suspend their disbelief to a much higher degree than the average moviegoer. In a comic book movie, visually speaking, everything has to be different from the source material, otherwise we’d be animating. A shot for shot, absolutely faithful live action version of the Super Friends might be very entertaining, but laughable. It’s a different media, a different language, with it’s own rules and limitations. The changes in costume appearance are the attempt to put the essence of that character within a live action framework.

‘Zurich’, the last ever episode of Radio 4 sitcom Cabin Pressure, was recorded. And I have feels! This is a too short comeback! I will miss you guys, you’ve been the first radio show I’ve feel emotionally attached to. And I won’t hear about because rumor has it that it will air on Christmas Eve. Creator John Finnermore gave a lovely speech that almost made Benedict Cumberbatch cry~ Then again, many were trying so suppress tears. 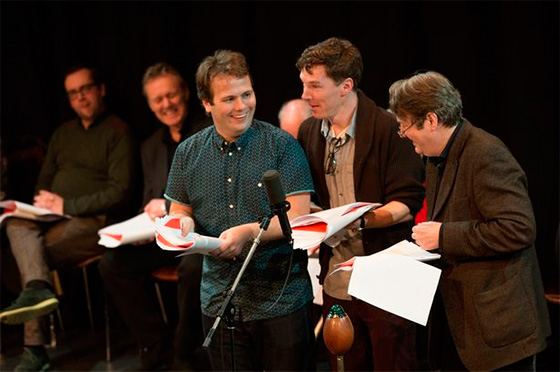