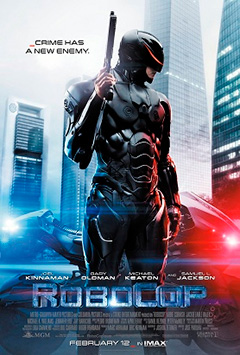 Well, this went better than expected. In fact, it is a pretty decent PG-13 remake of an R-rated movie!

This new Robocop has the core of the original one, where good cop Alex Murphy sorta dies because he messes with the wrong people, and then he’s turned into a cyborg who fights crime.

But it was the new stuff that made this movie “pretty decent”, even if it didn’t manage to be as “iconic” as the original or even that great. Besides, when the movie started with Samuel L. Jackson as conservative television host Pat Novak, we already knew that this couldn’t suck.

And that’s how we start, in a not-so-distant future, OmniCorp provides high security to every country in the world with their droids. Every country but USA, of course. OmniCorp cannot sell their robots on American soil because there’s this pesky law called Dreyfuss Act that prevents it. Meanwhile, Murphy gets hit with a bomb after getting too close in an investigation about an arms dealer. Being practically dead, OmniCorp convinces Murphy’s grieving wife to sign him into a program which will turn him into RoboCop. Because cyborgs are not droids, there’s your nice loophole and publicity stunt in a sorta-human package that will slowly introduce the American public to the idea of robots protecting them. Specially because Murphy does keep his conscience, or at least the illusion of it.

As a PG-13 movie, RoboCop was practically bloodless, but we did get our action scenes and our body horror moments. Also, the RoboCop suit looked way better than the stills led me to believe. I still wished they have kept the original colors through all the movie, but I got their reasons. Their “tactical-looking” reasons. And we got lots of little references of the original movie! They weren’t hidden enough to be called “easter eggs”, but they were treats for us who remember the 80s film fondly.

As for the cast, Joel Kinnaman was adequate for the lead role. He didn’t blow me away, but he did a decent job convincing me he was a good man and of his struggles. There was this part where he realises what he has become that actually surprised me because how great it was. I totally bought his feelings, and made me sorry for the poor guy. That brilliance never appeared again, but his role didn’t really need it.

Then again, Kinnaman would have had to be a once-in-a-lifetime breakthrough actor to steal a scene from any of the veterans. Yep, we are talking about Samuel L. Jackson, Gary Oldman and Michael Keaton. In fact, the moviemakers were so aware about how important they were that they may have overstayed their welcome as far as plot goes. I didn’t mind since watching them was a treat. And they could out-act any not-so-great script. We even got Samuel L. Jackson ranting -which included the word “motherfucker”- on his show! We also got the great scene of Gary Oldman as the scientist Dennett Norton screaming at his boss Raymond Sellars (Micheal Keaton), who is a smug asshat. Congratulations to whoever thought of hiring them.

The other noticeable actor was Jackie Earle Haley as the direct antagonist. I mean, sure, Michael Keaton is the corporate asshole and “end boss”, and Patrick Garrow was the bland bad guy who “murdered” Murphy, but the relationship with Haley’s Rick Mattox was personal. That and the fact that Haley is very good at being a psychotic creep.

So, what didn’t work? As much as I loved the way the showed the world and the situations that lead to the creation of Robocop, the movie took its time to soar and had pacing problems. That the resolution felt very rushed didn’t help either. It looked like they didn’t know what to do with their last act besides “it must look cool”, which left us with some dissatisfaction.

Still, way better than expected and while I am not eagerly awaiting for a sequel, I will probably watch it if it happens.