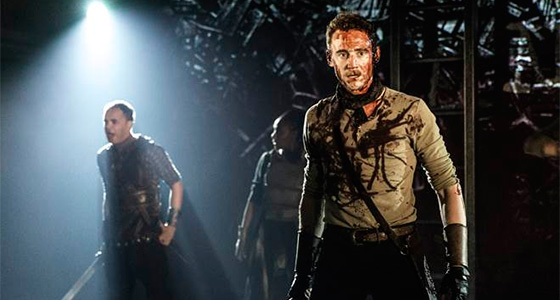 I’ve got to say that I watched Coriolanus mainly because of a certain actor. Sure, I adore Shakespeare, but it could have been one of many Shakespeare plays I don’t watch. So I’m glad I decided to watch this even if only because I want to watch everything Tom Hiddleston does. That Mark Gatiss was also there was also a nice bonus. Yes, Hiddles + Shakespeare + Gatiss = sold!

Of course, I am too poor to travel to the Donmar Warehouse in London. Thankfully National Theather Live broadcast it live and then there were encore screenings all over the world.

For those unaware, Coriolanus is a very political tragedy about Caius Martius, a Roman general who is great at all things war, but sucks at politics. After being the main reason the city of Corioles was won over from the Volsci, for which Caius is renamed “Coriolanus”, his overbearing mum makes him run for consul. The Roman Senate is won over and it even seems that he got the popular vote; but after some opposition, Caius goes berserk and spews what he really thinks about the commoners and even democracy. It ain’t pretty. And thus he gets vanished from Rome, and he goes to his former enemies, the Volsci, where he’d plan his revenge. As one can expect from a Shakespeare tragedy, this doesn’t have a happy ending.

Was it any good? It was better than good! It was great! Everyone was on point here. Except for that one scene where Birgitte Hjort Sørensen as Virgilia (Caius’ wife) screamed her line for no good reason. She was good the rest of the time though, and had excellent chemistry with Hiddleston~

Of course, the best female acting (and if fact, best acting in general) comes from Deborah Findlay as Volumnia, mother of Caius. In all her interactions with her son, you could plainly see all their backstory played out. You could see how Caius was raised, and how, in the end, it made his son a victim of his militaristic idolisation and contemp for the plebeians. Also, it was quite Oedipal~ Her last scene was golden too. I was properly overwhelmed.

The male actors had great perfomances too, Mark Gatiss was lovely as Menenius, friend of Caius and a proper politician. He’s the one who realizes the importance of Caius and how fucked up Rome would be if Caius marches against it. He’s very warm but cunning, the voice of reason, and his last scene with Caius was heartbreaking for what it meant to their bond.

Hadley Fraser as Aufidius was also noteworthy. He’s the antagonist turned ally, and finally executor, also there are homoerotic undertones regarding his feelings for Caius. His part was, just like Hiddleston’s, very physical and intense.

Finally, I’m not biased when I say I must give kudos to Hiddleston. He not only brought great physicality to the role (the fights had great coreography!), but he also embodied all the nuances of Caius’ personality: from mummy’s boy, to loving husband and father, and passing through great military man and totally naive and inept politician. Despite Caius’ terrible personality, he managed to makes us root for him at times, as well as made us facepalm because of his stupid arrogance. His moments of vulnerability, either by himself after the battle or the last ones with his family, hit all the notes.

As for the play itself, it was amazing how perfectly they managed to make use of such a small stage. Considering how epically Corionalus has been made, the intimacy of the Donmar was surprinsingly appropriate. The use of light, sound and props was on point. Those chairs were very useful. And the choice of mixing ancient and modern clothing for each character was also a good choice. The only thing that didn’t quite worked out was the music used between scenes while rearranging the stage.

All in all, Coriolanus was a great production and showcased the talent of all of those involved in it.

You can read our review for the film adaptation of Coriolanus directed by Ralph Fiennes.