Greetings, fellow fangirls and fanboys! This week Black Panther‘s reign reaches new heights, but apparently Disney can’t leave things alone and is bound to disappoint some fans in one of their “live actions” remakes. Also, some trailers and first looks! Here’s how the week started:

Apropos of the Chinese New Year, Marvel Studios released a cool new Black Panther poster… for some reason. A panther ain’t a kind of dog, but Disney sure want that Chinese money! 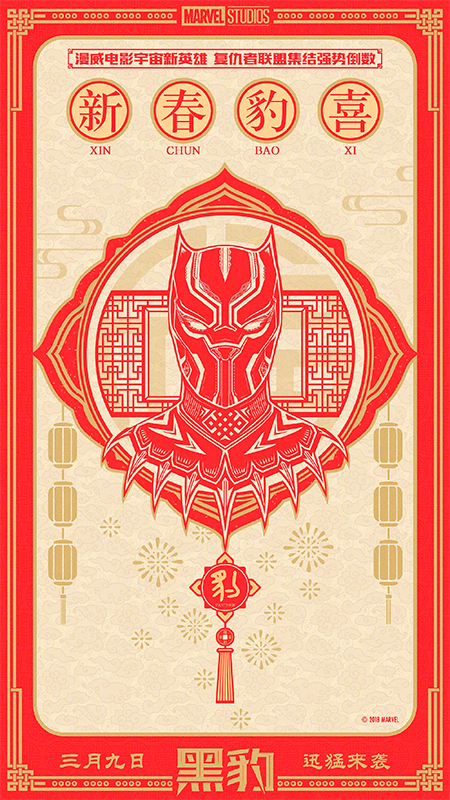 Yeah, we are going to talk about Black Panther a lot. Even its soundtrack is a hit, opening at No. 1 on the Billboard 200 chart. The soundtrack features Kendrick Lamar, the Weeknd, SZA, Khalid and James Blake among others, and opened with the equivalent of 154,000 sales in US. Black Panther: The Album also posted 138.9 million on-demand audio streams for its songs in the week ending February 15th, the biggest streaming week of all-time for a soundtrack of any sort. BTW, only three of the fourteen tracks on the album are actually used in Black Panther.

So yeah, Kevin Feige also claimed that when Black Panther was finished, he looked over at director Ryan Coogler, and said, “that’s the best movie we’ve ever made”.

This day started with outrage! According to The Sun, Elton John said that the “live-action” (more like CGI) Lion King movie won’t feature my favourite Disney villain song ever! Yep, ‘Be Prepared’ won’t be there. WTF, Disney! This is a travesty!

There’s going to be four of our songs in the film, from the original: ‘Can You Feel The Love Tonight?’ ‘Hakuna Matata,’ ‘I Just Can’t Wait To Be King,’ and ‘Circle of Life.’ And then there will be an end, closing song, and we’ve been speaking to Beyonce’s people and hopefully Tim [Rice] and I and her can cook up something. That’s going out in 2019 as well. And it will be great to work with her. So we will see.

And now it’s back to the one Disney African king who matters right now: Black Panther‘s actual box office over the four-day President’s Day weekend in North America was of $235 million. That’s not only an amazing debut… it’s more than Justice League‘s $228 million THROUGH ITS 91 DAYS AT THE THEATER. Damn, DC, you screw up bad!

So, about that Black Widow movie we are promised but nobody really thinks it’s going to happen, here’s Chris Evans name-dropping it!

There’s nothing [Marvel Studios] can’t do. And I’m sure it’s gonna have the exact same effect when Captain Marvel comes out, and then the Black Widow movie comes out. Marvel just has the winning recipe and they’re kind of one step ahead of everybody else.

So, the BAFTAs happened and I am mostly satisfied with the results. Coco got Best Animated Film and The Handmaiden got Best film not in the English language! But most importantly, Guillermo Del Toro won Best Director for The Shape of Water, and his speech was amazing, acknowledging “the miracle that is Sally Hawkins”, and called Mary Shelley “the most important figure from [the] English legacy”.