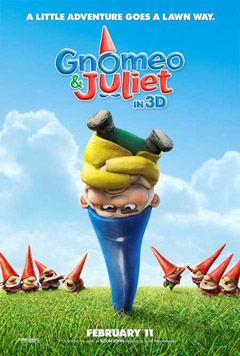 Gnomeo & Juliet takes the classic Shakespeare story of doomed lovers separated by a family feud and transports it to a garden feud between garden gnomes that become alive when no one is watching.

In terms of quality, I think 3D animation has gone a long way — textures and modelling seem okay, but there’s nothing inspiring or distinctive about the art direction to make Gnomeo & Juliet astounding. Even less to be done with the film being in 3D since it makes little use of it or uses it poorly.

As far as adaptations go, Shakespeare’s Romeo & Juliet has been told so many times before — like the film stated in its introduction — it makes one wonder what else could be milked from it. However, the main issue in Gnomeo is that it doesn’t really know who its audience is. At a point, it seems like it could turn into a grown-up affair with pop culture references of Elton John and American Beauty, but instead continues being fairly light and sticks to a happy ending.

The humor in it gets a few giggles here and there, especially in the beginning with frog/toad Nanette. The film also tries to turn into a poignant film as Gnomeo and Juliet meet lonely and multilingual pink flamingo Featherstone, which is ironic considering the character is voiced by Jim Cummings who also voiced Ray — a character that was really moving — in The Princes and the Frog.

All in all, Gnomeo & Juliet is a harmless and forgettable animated film that employs a lot of big names, but amounts to little.