Never in a million years did we imagine that you all would come out this strong. It still humbles me to think that people care enough to spend their money and time watching our film. But to see people of all backgrounds, wearing clothing that celebrates their heritage, taking pictures next to our posters with their friends and family, and sometimes dancing in the lobbies of theaters often moved me and my wife to tears. 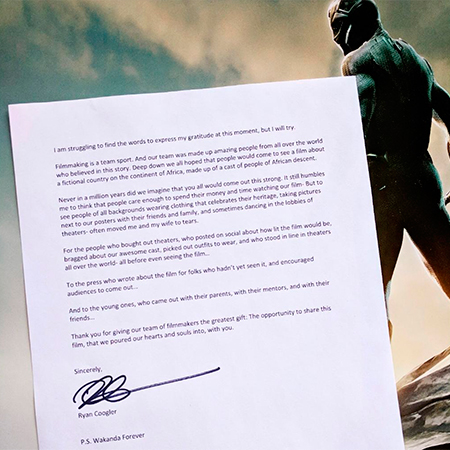 Ryan Coogler also talked about this one post-credit scene that could have easily been the ending of the movie… and, in fact, it almost was:

We played with a lot of different ways to end it. We went back and forth about the U.N., and we had a version where it was the U.N. before the scenes in Oakland at the end. But we really kind of settled on how do we want the movie to end? And it came back to that symmetry, and it came back to the most moving version of it. That’s what we were asking ourselves, ‘Who’s more moved emotionally, that kid or the people sitting in the U.N.?’ Who is that a bigger deal to for T’Challa to walk in, who’s more connected to him?

Letitia Wright, who played one Disney Princess Shuri, talked about her role in Black Panther and about being labeled the smartest person in the MCU:

Tony and Banner are great, not only as actors, but in the films themselves. They’re amazing, iconic characters, so to be able to be on par with them… and that’s not even something I said! I didn’t say that, the head of Marvel said that, and it kind of created a chain reaction. And Nate Moore said those things, so talk to those guys! They felt really strongly that Shuri was the smartest person in the universe, and I’m not going to downplay that.

Also, here’s a new trailer for Marvel’s Jessica Jones season 2. She remains angry and amazing. The new episodes of the Best Defender will be available on March 8:

Another amazing Marvel lady but of the PG kind will grace our small screens soon. Yep, we are getting a Moon Girl And Devil Dinosaur animated series at one of the Disney Channels… and it will be produced by Laurence Fishburne. I just hope Marvel steps up on their animation front, because usually their results are lackluster. Come on, Lunella Lafayette and her crimson-colored dinosaur deserve it! Check out the premise:

Marvel’s Moon Girl and Devil Dinosaur follows the adventures of nine-year-old super-genius Lunella Lafayette, an African-American girl who teams up with her crimson-colored dinosaur and uses her smarts to save the day.

Continuing with the theme of cool ladies, here’s a new look of a backlighted Jodie Whittaker’s Doctor and a new Doctor Who logo!

And finishing the day, here’s the first clip of Tomb Raider, with Alicia Vikander’s Lara Croft looking great and very inspired in the videogames. Hope this one videogame movie adaptation is decent at least! The film premieres on March 16.