The Fangirly Diary of a Geek Girl: A disturbance in the franchise

Greetings, fellow fangirls and fanboys! The week one big misstep in the Star Wars franchise was made apparent. Also, more TV promos courtesy of Game of Thrones, Star Trek: Discovery and The Defenders. Here’s how the week started:

Attack On Titan season 3 has been announced for 2018. It was announced during the season 2 finale, even though a specific date hasn’t been revealed. That said, OMG that’s like record time! Did you know how much time we waited between the first two seasons? 4 damn years. Anyway, here’s the announcement video:

According to Stranger Things executive producer Shawn Levy, “Season 2 makes the Demogorgon look quaint”. Those are tall words, dude! He also added this during interview on Facebook with The Hollywood Reporter:

I was just in the edit room with the brothers yesterday, and we’re like, “This is definitely darker. I hope everyone’s down with this,” because the threats to Hawkins and to our characters are bigger, darker, often times scarier. So people who found season 1 too scary for them, probably you’re going to be more scared by season 2. But again, the best thing I can tell you is that through it all, it’s got the best heart. But it is, cinematically and budgetary, it’s definitely more ambitious.

Pixar’s Cars 3 managed to unseat Wonder Woman for the top of the US box office… but the DCEU movie managed to reach $500 million worldwide! So yes! Get money, Diana, Princess of Themyscira!

Talking about Wonder Woman, check out the lovely artwork about the history of the Amazons. You know, that lovely bedtime story about war and death that Queen Hippolyta told toddler Diana. Thank you artist Houston Sharp for sharing all the artwork in that scene, including those that didn’t make the cut! 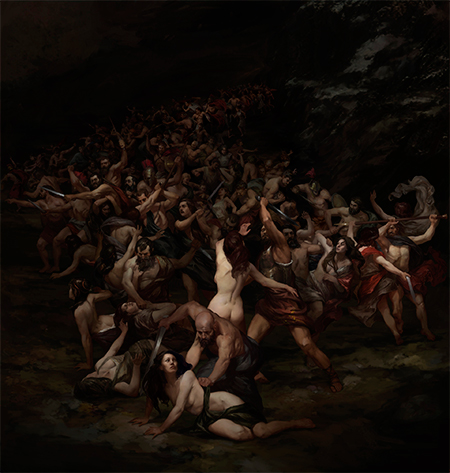 A couple of positive reactions for movies I really want to watch: Spider-Man: Homecoming and War for The Planet of The Apes. OK, just the one guy reacting (positively!) about Spidey. But we have at least 5 guys saying nice things about Caesar and his merry band of apes!

We finally have a premiere date for Star Trek: Discovery: Sunday, September 24. The date comes quite close to landing on the 30th anniversary of the debut of Star Trek: The Next Generation tho! It was on Monday, September 28, 1987. So, why was it delayed? The showrunners explain here. (Basically it was due to design and world-building… and CBS giving them all the time and money needed to have those at tip-top condition).

Godzilla: King Of The Monsters has begun filming, but in the shared press release of Warner Bros. and Legendary Pictures they never refers to the film by that name. Are they going to change the film’s title? Anyway, the synopsis totally confirmed the presence of Mothra, Rodan and King Ghidorah:

The new story follows the heroic efforts of the crypto-zoological agency Monarch as its members face off against a battery of god-sized monsters, including the mighty Godzilla, who collides with Mothra, Rodan, and his ultimate nemesis, the three-headed King Ghidorah. When these ancient super-species—thought to be mere myths—rise again, they all vie for supremacy, leaving humanity’s very existence hanging in the balance.

According to Sony producer Amy Pascal, Venom is totally part of the MCU, at least as far as Peter Parker is concerned… which was totally news to Kevin Feige if we go by his face on that interview. LOL, I see what you are doing, you devious Pascal you! That said, “Confused Feige” is the new “Sad Affleck”. I don’t think the meme will be as popular, but it sure is doing the rounds!