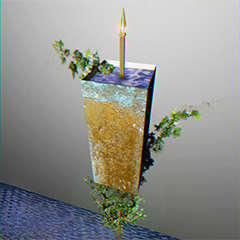 Clarence Clarity’s No Now is a testament unto itself, a lesson in how to use a deceptively abstract and unstructured piece of music to dissect the frailties and insecurities of the human psyche. No need to gild the lily with niceties. Let’s just delve right in.

The album begins with a booming chorus like the End of Days, but more on that later. This entire piece of music is essentially a means to take the mind places it’s too afraid to go. Equal parts Róisín Murphy and You’re Dead-era FlyLo, Clarence Clarity comes in with a voice like the quiver of a violin string—wound tight and aching beneath the finger and bow of a delightfully mad genius.

No Now is eerie, like sounds plucked from the mind and images of Stephen Gammel–frighteningly skewed but undeniably beautiful. There are moments when you think you hear something familiar, maybe not soothing but common enough to ease the nagging bug in your ear. But things get stretched, warped, chopped, and twisted—think ’90s-era Nickelodeon cartoons, or MTV’s Liquid Television. You know something’s not exactly… right, but the attraction to it is too strong. Add in bits of pop culture just for fun—as in the transition screen from Donkey Kong 64 (Will to Believe), or a mysterious phone call reminiscent of the creepy whisper that tormented Carol Kane’s Jill Johnson back in 1979 (1-800-Worship)—you’ve got nothing short of one of the most eclectically mesmerizing albums in the last few years.

I’d liken it to free jazz–a wall of sound characterized by no definable characteristic. However, unlike the cacophony of minds and visions that come together to collectively create “free jazz,” there’s most certainly a calculable method to Clarity’s madness. Though it may seem like a “bunch of sound,” for lack of a better term, the truth is every click and tap, every warble and trick actually comes together to create a discernible whole. There’s nothing here by chance and nothing wasted. There’s an emotional weight to each and every song. Yes, the lyrics do have a hand in that, but don’t think for a second there isn’t something inherently intelligent in the sound.

Clarity seems to build a universe around his poetry. His words strike a chord because they’re so incredibly personal and poignant. A track like “Off My Grid” touches on the pain of being completely lost in one’s self, lost in the need for… something. There’s an element of self-abuse and an almost desperate self-loathing—at once saying, “I’m addicted to myself,” then proclaiming “I’m disgusted with myself”—that speaks to the need to have somebody reach in and set us back to rights. Preceding that with “Hit Factory of Sadness,” a sudden lurch of machines, wires, computers, loops and computer tricks, it appears to be just a mess. But doesn’t that paint the picture of a man screaming for help? Doesn’t this speak to the very nature of a mind wrapped in on itself, incapable of finding escape from the darkness that eats him up and eschews his sense of reason? It’s violent, brash, loud, bold, unapologetic, and in the same breath afraid of itself. A bash and boom, then a countdown to an explosion that ultimately is too contained to actually act itself outward.

What did I say? Intelligent.

Then there are tracks like With No Fear, a song that gives me such vicious memories of Pink Floyd’s Don’t Leave Me Now or The Thin Ice, I was thrown back to the first time I actually listened to The Wall.  It’s familiar, but the angle at which the music bends gives enough discomfort to cause anxiety. Yet you just can’t turn away from it. No Now, as its title declares, is an album that refuses to be ignored. So incredibly scattered like a mind seeking a truth, yet there’s such an undeniable heartache in the tracks, vengeful and conceited at times, powerfully sad at others.

But nothing, and I mean nothing, quite manages to capture the essence of this warped and mangled universe than the album’s opening and closing, a veritable alpha and omega. The transition from Outro (Now I Am) back to Intro (Become Death) is the cleanest jump from the end of an album to the beginning. Particularly when one realizes the message: “Now I am Become Death.” Opening the album in the throes of Death’s rapture, only to crawl through his mind until he finally reaches the moment of “I am.” Also fitting is the manner in which he arrives at this realization—”Now I Am” is set on a reverse sigh, a loop sent backwards as if we’re meant to crawl in reverse back to the depths of nothingness we came from to “Become Death” once again. The declaration begins softly, a tentative breath into a new state of being. It’s as if this chorus of demons was once pure, innocent in all things of the world—as if the world is actually beginning again and they find themselves digging through the husks of a previous plane of existence. As they continue their tentative march forward, becoming more brazen and fearless with each step, the chorus reaches a peak… a loudness that has alerted someone to their presence—the Reaper? Perhaps Satan himself? Who’s to say it isn’t some ancient god or supreme goddess come down to pass their judgment? Being bold with their newness, they’ve tasted something forbidden and now must accept that all that’s left for them is death, this final form, this Becoming.

Tl; dr: Damn, is this one frighteningly brilliant piece of music!

You can stream No Now on Spotify, Tidal, and Apple Music. You can purchase the album on iTunes.