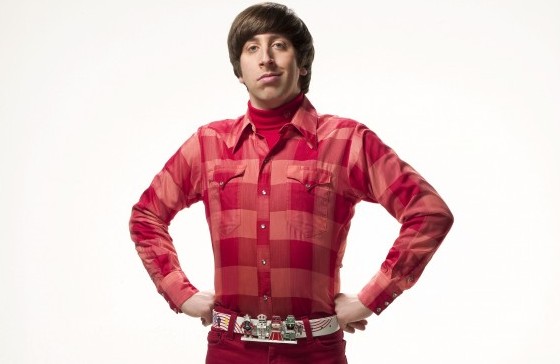 When I told Amy that I was going to write a blog post about The Big Bang Theory‘s Howard Wolowitz (Simon Helberg), she replied back with, “Is it a hate post?”

That got a a laugh out of me.

Considering how much Amy knows me, it wouldn’t be far-fetched for me to write something hateful about Howard (or anyone I despise) — and the guy has his share of things that make him unlikeable, creepy and worthy of legitimate hatred. However, the recent TBBT episode that had Howard working with Stephen Hawking — yes, the brilliant scientist guested on the show — proves a point: Howard’s success in his work field is bigger than nearly anything his friends have ever accomplished since the start of the show.

For the entire run of the series, Howard (Aerospace Engineer) was always made fun of for lacking a Ph.D degree. All of his friends (except Penny for obvious reasons) have a Ph.D — even Bernadette (Melissa Rauch) got her Doctorate degree during the Season 4 finale. But things start to change for Howard in Season 5, as NASA selected his team’s design for a deep field space telescope that will be installed on the ISS, granting him the opportunity to fly aboard a Russian Soyuz rocket to observe its deployment on the space station as a payload specialist for Expedition 31. [1] Also, Howard was requested to report to the NASA Johnson Space Center in Houston, Texas for astronaut training.

Yep, Howard gets the chance to fly into space. Doesn’t that sound greater than nearly anything his friends have ever done?

Add in getting to work with Stephen Hawking (even if it’s by supervising his wheelchair) — with obvious envy from Sheldon (Jim Parsons) — and Howard’s got the edge on his friends, as seen during the episode when he manipulates Sheldon (the worst offender) by having him perform ridiculous tasks before Sheldon meets Hawking.

Not to mention Howard’s relationship with Bernadette is a lot more stable than say, Leonard/Penny and Amy/Sheldon.

So if he’s made fun by his friends for his lack of a Ph.D (or for his relationship with Bernadette), shouldn’t Howard be in the position of telling his friends to fuck off?

This should happen at some point during Season 6, but not right now, considering the last three episodes are set to focus around Howard’s wedding and entering outer space. Simon Helberg isn’t high on TBBT‘s food chain as his co-stars Jim Parsons, Johnny Galecki and Kaley Cuoco. But he does have great chemistry with Melissa Rauch and he’s responded well to Howard’s development over the years so far. If Chuck Lorre and Bill Prady decide to give him the ball in the same way they did for Mayim Bialik’s Amy on Season 5, Helberg could execute the “fuck off” moment and elevate Howard into something bigger — maybe even making Herlberg worthy of award recgonition in the highly competitive Supporting Actor field. However, Howard’s characterization — which mostly ranges between funny/creepy and women-dependent — would easily prevent him from snapping and dumping his friends… let alone his loud-mouthed mother.

But I could still hope for a line like: