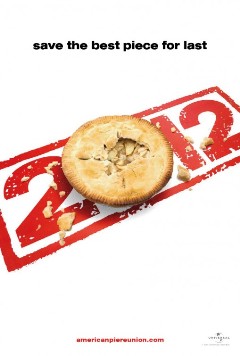 Regardless of what you think about the first American Pie film, it’s undeniable that the franchise — which set the tone for “teen sex comedy” films back in 1999 — has worsened after the first film. American Reunion, the fourth film in the original series (eighth if you count the National Lampoon-esque spinoffs), revists the characters from the franchise in their early 30s as they meet up once again for their upcoming high school reunion.

For those who remember American Wedding, you know that Jim (Biggs) and Michelle (Hannigan) tied the knot years ago. The married couple now have a two year old and seem to have complications finding the spark their relationship used to have. They make plans to rekindle the fire when they return home for the reunion.

We also get to see what has become of Jim’s best friends 13 years after they graduated. Oz (Klein) is a successful sportscaster living in Los Angeles with his flashy girlfriend Mia (Bowden). Kevin (Nicholas) is happily married to his suburbian wife (Charlene Amoia). Stifler (Scott) is forced to work because he’s got to pay for his stuff. On the other hand, Finch (Thomas) has somehow become a motorcycle-riding world traveler.

While Jim and his friends reunite days before their high school reunion to relive their youthful days, they end up having their friendships and relationships put to test — Jim has to deal with 18-year-old Kara (Cobrin), whom he used to babysit — as well as understanding the concept that things will never be the same as when they were seventeen.

Along with doing its typical style of humor, showcasing hot chicks and raunchy jokes as well as tipping its hat to the first and third films, American Reunion shares similarities with Young Adult. Both films deal with reuniting high school people after many years, but Stifler also mirrors Mavis Gary, as he has a hard time letting go of the past. American Reunion, unlike the second Hangover film, shows the heart and feeling it had from the first film and somehow manages to work quite well for a nostalgia film with a certain degree of realism regarding the high school reunion theme. The nostalgia factor not only has to do with the characters, but it also extends to the late 90s music heard during the high school reunion organized by the Asian MILF guy (Cho).

Despite most of the film’s laughs coming from the douchetastic Stifler, I have to say that one of the biggest highlights was Eugene Levy, who is more touching and funnier compared to the previous films. He elevates Jim’s father from a man who only offered sex tips to his son into a widowed father who still cares for his son and overcomes his wife’s death as he attends Stifler’s party to have a good time.

The film isn’t free of flaws: the chemistry between Mena Suvari and Chris Klein felt forced and the same goes for Thomas Ian Nicholas and Tara Reid. The film loses a bit of steam in the middle portion when we’re at Stifler’s party, but improves during the high school reunion thanks to good performances from Hannigan, Biggs and Scott, along with small cameos from past characters.

Despite the film not being a masterpiece by any means, American Reunion easily lives up to its slogan — Save the best piece for last. Maybe it’s the nostalgia of seeing these chararters and the 90s music that made me enjoy the film more than I expected despite the cheap jokes and typical American Pie humor. After all, isn’t nostalgia always a bitch?