Warning: There will be spoilers for the 3rd season of Glee on this post for those that aren’t getting Season 3 broadcasted in their countries.

Glee’s recent episode gives me a reason to use the blog feature. This whole bullying and outing stuff is a fucking head-scratcher in my opinion. 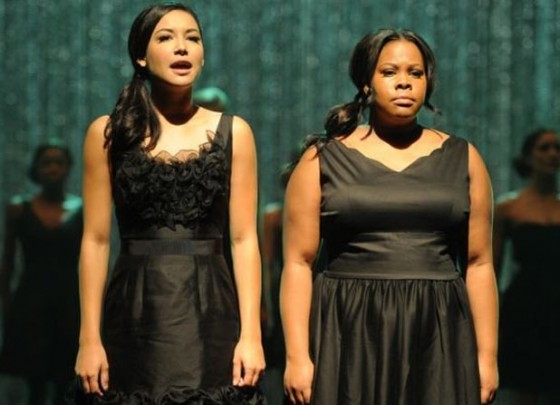 In Glee’s recent episode, both Finn (Cory Monteith) and Santana (Naya Rivera) stood out the most during the Mash-Off episode, which also included the rage-inducing Beth storyline, students (Kurt, Rachel and Brittany) running for class president and Sue vs Burt campaigning for Congress. At this point, both characters are the most unlikeable characters the show has. If anyone studied with people like them in reality, they would either hate them or kick their asses to death.

On Mash-Off, Glee had Santana bully Finn verbally to the point where he literally snapped and outed Santana as a lesbian in front of high school students.

“I think I know why you’re so good at tearing everybody else down. It’s because you’re constantly tearing yourself down because you can’t admit to everybody that you’re in love with Brittany, and she might not love you back. That must hurt, not to be able to admit to everyone how you really feel. You know what I think you are? A coward. See you at the mash-off.”

First of all, didn’t Brittany out Santana before in Season 2 via online show, “Fondue For Two”? But this is Glee, so they tend to forget the stuff they pull off when it’s convenient. Plus, since Santana loves Brittany (Heather Morris), this somehow ends up being forgiven. While outing someone who isn’t ready to come out yet is very wrong, why the hell is it okay for Brittany to do it and not have her face the consequences?

Second, Finn is officially the show’s biggest asshole character ever, and right now he would rank very high on any “TV characters I would love to murder” list. All the stuff Santana said against Finn was typical Santana trash-talking (albeit over the top and meaner this time), but outing a lesbian in front of students is just downright criminal, especially when Finn has Kurt as his stepbrother. But wait, Glee rarely gives a shit about said fact after the Furt episode.

Anyways, it’s not like Santana is a saint either. Despite the fact that I love Santana as a character, she’s still a bully who unleashes relentlessly on nearly any character in sight , even blackmailed a gay student to get what she wanted and took advantage of Birttany’s stupidity for her personal gain not too long ago. At one point, someone had to call out Santana on her shit. And as much as I hate Finn, because he’s a boring character in execution and Cory Monteith isn’t a strong actor, I’d rather have Finn doing this – without the outing – than say, Artie (Kevin McHale) doing it instead.

Third, isn’t all kinds of bullying considered to be wrong? Granted that there’s been a notable suicide wave with gay teenagers being bullied since last year and that’s pretty sad, but Glee’s double standards with bullying is head-scratching. It’s not like gay people are the only ones who kill themselves for being bullied; other people being made fun of for their looks or defects have been just as tragic, unfortunately. [1]

If Santana bullies anyone, it’s passed as comedy material on the show because Santana does it for fun and, for the most part, characters insulted by Santana seem to not care much about it. But if someone like Kurt or Santana get bullied, the show lets you know that it’s a felony of the highest degree. And there’s a big problem when Glee does its (ongoing) uneven writing with the characters: while Kurt got the nice guy treatment and understood that outing someone is wrong, regardless of Karofsky’s behavior towards him, Santana could look like she got bitten in the ass by karma thanks to all the pile of insults she dished out against Finn and others in the past.

Despite all the above, the last 5 minutes were nothing short of phenomenal – rest of the episode wasn’t good – thanks to Naya Rivera, who makes Santana Lopez one of Glee’s highlights: being funny, bitchy, singing with style, selling pain and devastation like a champ during an Adele mash-up performance, while being aware that she’ll be outed through a political attack ad targeting Sue. Also, Rivera even managed to make Cory Monteith look good, which was something only Mike O’Malley accomplished before in the first season.

The saddest part of this is that thanks to the uneven writing, there’s a chance that Santana will revert to being an asshole and also made out to look like a total bitch who deserved to get outed. Meanwhile, Finn will somehow end up looking like a fucking hero (again) for “helping Santana to come out of the closet” rather than having him deal with the consequences of outing a teenager or getting pummeled to death by Burt and Kurt. #thanksfinn