The Fangirly Diary of a Geek Girl: Life, uh, finds a way

Greetings, fellow fangirls and fanboys! This week one iconic character is returning to the Jurassic Park/World franchose! Also, a couple of directors are getting franchise jobs, updates on premiere dates, and Guardians of the Galaxy is out in some parts of the world and thus we have the last batch of related news! Here’s how the week started:

I guess Rosario Dawson’s Claire Temple is the glue that joins all The Defenders independent Netflix series; and since The Punisher is not part of the team, he doesn’t get Rosawio Dawson either. Which kinda sucks.

Sean Bean is not the only actor who has died a lot (the late John Hurt, Vincent Prince and Bela Lugosi win for now, but Sean has more movie deaths in his future I expect), but which death is his favourite one? Boromir’s in The Lord of the Rings: The Fellowship of the Ring of course! “You couldn’t ask for a more heroic death“, and I agree. It’s also the first that comes to mind.

Damn, The Fate of the Furious is well on his way for $1 billion mark, getting $908.4 million globally! Lots of that is from China, who seriously loves that franchise, and gave it $318 million.

Marvel Big Boss Kevin Feige confirmed that there will be four years between Guardians of the Galaxy: Vol. 2 and Avengers: Infinity War. The reason? Director James Gunn wanted this new adventure to be just a few months after the first film. So yep, this one it’s the first MCU film not set in present day upon release after Captain America: The First Avenger.

Yeah, knowing that outside of the Guardians franchise, we don’t necessarily always date the movies. You don’t always know, we don’t say, ‘2012, 2013…’ We do in the Guardians because you do the math and 1988, and it’s 26 years later. But we never say, ‘Oh, this takes place in 2018, this takes place in 2017.’ But it was important for the story that James wanted to tell that they’re still relatively fresh in their new group.

Keeping the theme of Avengers: Infinity War, Kevin Feige said Thanos’ motivations will be similar to what they were in the 1991’s Infinity Gauntlet‘s comicbook event “in various ways”. In that evet, Thanos wants the Infinity Stones (“Infinity Gems” back then) to wipe out huge swaths of life in the universe, to win the love of the personification of Death. So, will we get a Death personification in MCU? Or, as some have speculated, will Cate Blanchet’s Hela could be MCU’s Death?

Feige also hinted that title for Avengers 4 has yet to be revealed because it’s a potential spoiler for the events of Infinity War. As for Marvel’s Phase 4?

Certainly as we get to Infinity War there is a sense of a climax if not a conclusion to, by the time we’re at untitled Avengers 4, the 22 movies that will have encompassed the first three phases of the MCU. And what happens after that will be very different. I don’t know if it’s Phase 4, it might be a new thing.

Here’s a new poster for the Fullmetal Alchemist live-action movie. This movie looks good, but I am yet to be convinced. I guess I need to get over that Edward Elric wig… at least is better than Kate Mara’s Sue Storm wig. 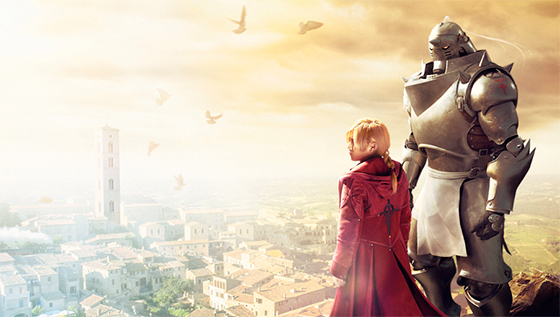