Hello, everyone! I’m back again to regale you all with my adventures at South by Southwest. While for the most part the festival was as amazing as it was last year, there was a pall put over the event. But more on that at a later date.

That being said, much of my time leading up to the first official night was spent somewhat jaded, upset, and mostly pessimistic. Though I’ll probably be (rightfully) admonished for this, my initial thoughts on the first day were that South by wasn’t going to live up to the wonder I felt my first year going. (I know. I know.) However, that first night, even in a bit of pain and slightly agitated, I officially kicked of my 2017 SXSW experience. And it… was… GLORIOUS!

The venue for this particular showcase was a typical club: large dance floor, cramped seating area, decently stocked bar… not so great bathrooms. And pinball machines! The stage was still being set for the first band to perform, people still milling about, music videos from the night’s acts looping on the stage TVs. As the members of the first band started to take the stage, everyone made their way to the front. What was about to take place was the spark I needed to know that this year’s SXSW was going to be everything I’d hoped for and so much more. 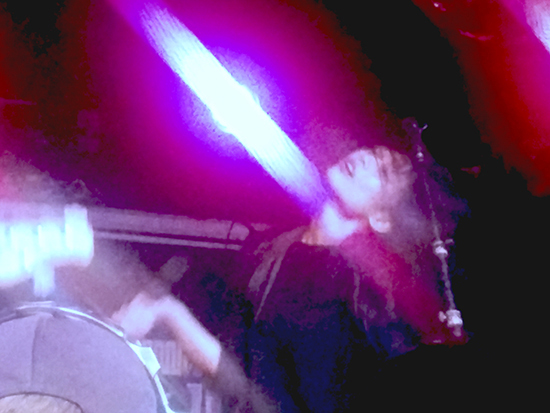 The sound that floats through the speakers is serene—enough, anyway, that at this point I’m not yet convinced I’m going to really enjoy the night. Then… Dorian Chan happens. It’s clear from the very way she moves she carries a burden inside her, the weight so heavy it keeps her off-balance and her voice in a constant state of scream and shout. She walks out, no shoes and a Budweiser in hand. She takes a sip, the guitar strums a melody, the drums clap… and she explodes. There’s almost no warning when the detonation happens. It’s just count of three, duck and cover. But much like an explosion of fireworks, no matter how loud or how bright, you can’t look away. The blazing brilliance of it keeps you tied to the spot you’re standing in.

The barefoot vocalist has obvious shades of Björk, unrestrained and almost virgin in purity. Though at times the over-the-top affectation of her performance is obvious—clutching her beer as she gyrates and oftentimes falls to the stage floor at a song’s climax—there’s no denying she gives a show that keep most of the audience utterly entranced, if the glazed-over gazes and swaying of many of the venue’s occupants is anything to go by.

That being said, I can’t deny that my attention is pulled the left. While most are undoubtedly drawn to the lead singer, I can’t take my eyes off the drummer, Jimmy Kuan. His presence is just as dynamic as Dorian’s, though decidedly more understated. He has all the vigor of a man possessed by the music, playing as if there’s a spirit in the notes grabbing hold of his backbone. Melodic and heavy.

Just as the depth and emotion of the first act begins to settle in the bones, Dorian takes her final bow, and we’re left in a sort of limbo before the next act. After what seemed like an almost religious experience, there’s a noticeable lull in the energy.

A problem quickly rectified when the next act alights the stage.