Block B – Welcome To The Block 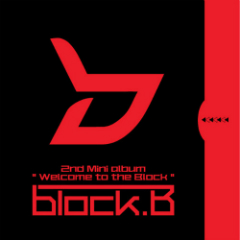 Why this group wasn’t awarded every single “rookie of the year” award last year is beyond me.

I have spoken higly about Block B before. From their debut single, Freeze! (그대로 멈춰라!) [MV], to their other great singles such as Tell Them [MV], and now with their latest one NanrinA, Block B is a group that stands out in the Korean music scene. They are a cool fusion of hip-hop with some Kpop flavor. It’s a combination that sounds weird and impossible, but somehow Block B makes it work.

I will admit, at first I disregarded Block B as a Big Bang knock off. It wasn’t until later that I realized how wrong I was. I will admit my error and accept the blame. I repent not being able to instantly see how special Block B is. They stand in a league of their own, and they prove it with each release.

So what is so good about Block B? I think it’s pretty much everything. Welcome to the Block is a mini-album that shows the diversity in the Block B sound. They aim to prove that they can do it all — from more raw hip-hop in LOL, to dance in NanrinA, all the way to some smooth hip-hop/rnb fusion in Did You or Did You Not.

Block B’s first mini-album, New Kids on the Block, has soon become one of my favorite Korean albums of last year. Sure, it took me a while to discover Block B, but I guess their distinction from the current Kpop sound threw me for a loop. To call Block B a Kpop group, however, sounds wrong to me. They aim for that mainstream fame that comes with being a Kpop idol, but their sound and style makes them stick out. I believe that Welcome to the Block proves that Block B is so much more than a mere Kpop group — with team leader Zico writing and producing every track in this mini-album at only 20 years old. The album as whole is just a great little gem. Every song is good by themselves, and together they make a good musical experience.

Block B has enough swagger and derp to cleanse your palette from the overly sweet/electro Kpop sound, yet they aren’t hardcore hip-hop as to make you somewhat have a hard time listening to their music. Block B has managed to show that they can manage different genres, as well as be chameleons — they can show different colors and flavors depending on what they sing. They are a great alternative if you’re looking for something new and fresh in the Korean music scene.

Preview the album on Xiami – Like it? Buy it on YesAsia