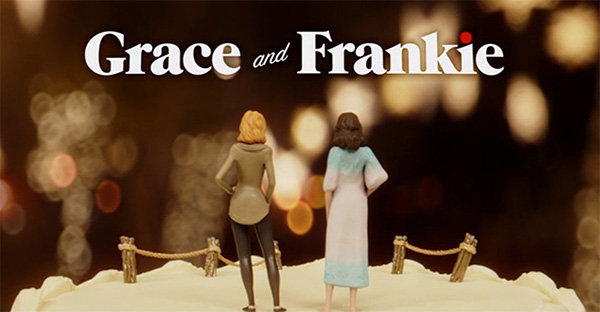 Nothing like an easy binge-watch of a 13-episode 30-min show (clocking at 20-something minutes counting title sequence and end credits). Is it really just me or comedies are much more inclined to be watched this way, instead of week by week?

The weekly wait can get really tiresome. No? Just me?

Grace and Frankie gives the tale as old as (modern) time of separation and divorce a light spin when on a dreaded lunch where Grace (Jane Fonda) and Frankie (Lily Tomlin) believe their husbands will be announcing their retirement from their law firm, Robert (Grace’s Husband, Martin Sheen) and Sol (Frankie’s husband, Sam Waterston) tell them they’re leaving them for each other instead. Happy times!

Leading a farce for the last 20 years of their 40-year-old marriages, Grace and Frankie see their world crumbling down as their soon-to-be ex-husbands start their life anew with the promise of marriage, only finding solace in their conflictive personalities– Fonda is a high-strung high-maintenance ex-beauty-product-CEO upper class housewife who stayed married to her husband out of contempt, while Tomlin is a hippy-dippy environmentally-conscious earth-mother-loving housewife who truly loved and cared for hers. Their chemistry and interactions is perfectly showcased in the first episode, The End, during Frankie’s peyote-induced spiritual journey and Grace’s pill-popping adventure.

The show it’s self-aware, it knows “the gay thing” can be seen as a gimmick in the seemingly happy-go-lucky attitude of the split, though it’s quickly addressed in Ep.03 The Dinner, when Robert and Sol invite their children — Sol’s Coyote (Ethan Embry) and Nwabudike (Baron Vaughn) and Robert’s Mallory (Brooklyn Decker) and Brianna (June Diane Raphael) — for their first awkward family dinner, and reaches its first honest moment in Ep.05 The Fall, when Grace finally sees her (though unconventional) unconditional bond with Frankie.

What’s surprising about Grace and Frankie is that it plays so much more like an ensemble show than a two-female-lead one. They’re gonna end up cancelling each other in the Female Comedy Lead category, or there can be trouble. And though both Fonda and Tomlin are credited as executive producers, they get paid the same as Sheen and Waterston [1]. The writers have done enough to build these couples (Lily Tomlin in heartbreaking at times) and setting a solid base for their children, hitting my favorite emotional nudge on Ep.08 The Sex when Brianna shares an unlikely Zephyrentamental moment with her father.

The end of the season, The Vows, leave most things open-ended (though Grace and Brianna get sort of a new path) and drops a huge bomb that will cause ripple effects for next season.

The show is good enough to have my technologically averse mother consider getting her own Smart TV.