Letter to Momo, A 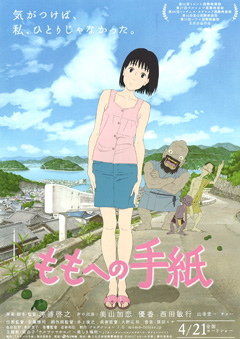 Don’t you love when movies surprise you? I wasn’t expecting too much of A Letter to Momo, other than maybe a nostalgic weepy drama, which it is in essence. And I’m not really familiar with Okiura’s animation, so I wasn’t sure about what to expect from the style and quality, though after this one I might have to hunt down Jin-Roh.

A Letter to Momo follows 11-year-old Momo (Miyama), who has moved to the Setouchi islands with her mother Ikuko (Yuka) after the passing of her father. After a bitter goodbye, the only physical memory she holds onto is a piece of paper with her father’s handwriting saying “Dear Momo.” During the trip, three mysterious droplets fall onto her head giving her the strange ability to notice a series of mysterious beings known as Yokai [1] — animal spirits, demons, guardians or anything supernatural really — called Iwa (Nishida), Kawa (Yamadera) and Mame (Cho), who will cause her more than one grief during her stay in the islands, as she deals with having to let go and moving on.

Though A Letter to Momo lacks a little bit of the whimsical magic of Ghibli’s My Neighbor Totoro, they are both in essence very similar. Both are about girls moving into a quieter town where they meet magical beings that help them deal with things in their lives, but since Momo is quite a bit older than Satsuki (and Mei, obviously), the storyline in here is a lot more emotionally affecting and mature, despite the fart joke… which brings me to Toshiyuki Nishida. I have no idea if it’s my familiarity with Japanese entertainment, but I immediately got his voice as the big Yokai called Iwa, who… believe me or not, took me back to Nishida on A Ghost of a Chance, which surely had me laughing a lot more with the memories.

The animation style is amazing — I read this has been in production for seven years, which really paid off not only technically, but Okiura’s script is really strong even if it seems like simple character drama. The development is quite nuanced, but rarely feels painfully slow because the Yokai are clowns. I love that Japanese culture, despite all its kawaii culture, gets to embrace all their supernatural beings as scary-looking as they get to be. Iwa, Kawa and Mame may not be cuddly characters worthy of children merchandise (as Totoro is), but they really are the life of the party to balance out all the scardiness and unattached nature of Momo… and they’re GOOD GUYS! It’s always so refreshing to see that.

Of course, what sealed the deal for me and amped my rating was the final act and resolution. The third act is epic, it’s emotionally dramatic and Okiura matches that with a huge action fantasy sequence that’s beautifully animated that takes you high up to then strike you with the last emotional blow. I loved the little boat scene- I think I was expecting it, but still left me emotionally satisfied.

I don’t think a release with English subtitles of A Letter to Momo is available, so *wink*