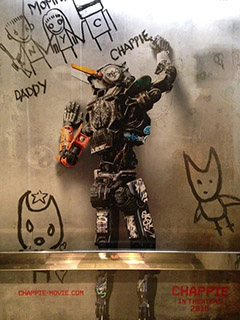 I’m shocked (no, not really) that Chappie doesn’t even cross the 30% RT Tomatometer, while Elysium stands at over 65%, but I suppose people are much more into class clashes where the poor battle it out with the rich than… exploring artificial intelligence. While a lot of people like to bring up RoboCop (not exactly A.I. in the strict sense of the word- he was human before being a robot, no?) and Short Circuit, I’m seeing Chappie as a very early prelude for Time of Eve, which I think is the finest story on artificial intelligence I’ve seen so far.

Blomkamp’s third feature sci-fi entry is a fleshed out (and often convoluted) version of his 2004 short Tetra Vaal, in which the city of Johannesburg is being patrolled by police robots, developed in the film by Deon Wilson (Patel) making loads of money for Tetravaal’s Michelle Bradley (Weaver) and its investors. South Africa has managed to reduce crime rates with minimum police deaths, and Tetravaal is looking for expansion into other markets, but the only person that seems unhappy with the developments is ex-military Vincent Moore (Jackman), whose chunky and -still- human-dependent MOOSE project is choking for funds.

When his quest for a true free-will conscious program is over, Deon secretly tests it on a police robot that’s been recently damaged on the field, resulting in the child-like Chappie (Copley).

In a recent interview, Blomkamp admits [1][2] he can get carried away with an idea at the cost of a strong script, and it seems to be present here as well- visually, Chappie holds that similar grit of his previous entry showcasing the growing violence of a developing nation that’s about to collapse. That feeling of insecurity is so familiar to anyone that lives in Latin America (at least), and thus creates a world that wouldn’t be too far off. What I would’ve wanted more of is Chappie and his relationship with gangsters Yo-Landi and Ninja (South African hip hop duo Die Antwoord, whom everyone seems to be hating) alongside Amerika (Cantillo), instead of the big booms (but still underwhelming) battle with the giant robot that Jackman commanded as the stereotypical fear-monger. I did feel certain excitement when I saw that body split into two, though. Teehee, guilty.

What sets the film apart is the build up of these unlikable thugs who are set to corrupt this kid-robot to their advantage, they have the biggest arcs in this story- Patel’s character is never build strongly, while Jackman and Weaver just fizzled, so it’s the South Africans that have to carry the big weight around… and critics seem to hate them! I can’t believe people are comparing him to Jar Jar Binks. In one of the strongest scenes, Chappie is captured by Moore and is literally violated to the point he loses the back of his head and an arm, fluid spilling as if it were blood.

There was a certain All Is Full of Love [MV] beauty by the end, though I felt that resolution was done way too quickly and was a little convenient. Then again~ I’m the crazy one that actually liked the ideas discussed in Transcendence.