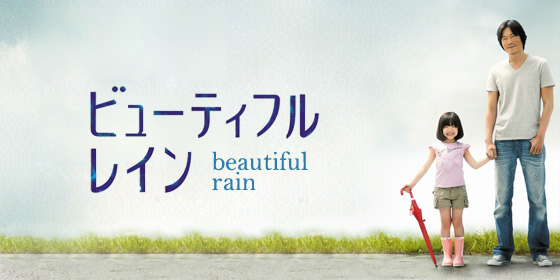 Get yourself a box of Kleenex and cry me a river, Ashida Mana-chan delivers her latest tearjerker drama with her sunshine personality. Beautiful Rain — written in katakana as the meaning of Ashida’s character name Miu (美雨) — tells the story of young single father Keisuke (Etsushi Toyokawa), who is diagnosed with early onset Alzheimer’s and must figure out what to do with his 8-year-old daughter.

The cute and adorable Miu loves her father because he’s everything she’s known since the passing of her mother, and has lived with him up in their small apartment on top of his father’s factory workshop, where he’s worked since he became a single parent. The no-name factory workshop is small and more like family than a workplace, in a district that seems to be such a tight community.

Of course, Beautiful Rain is predictable (there’s only one possible ending, no?), but it doesn’t undermine its better qualities — above average acting with important talks about Alzheimer’s Disease. Very much like the characters in the series, I had always put the disease side by side with old age. I was drawn to the idea of what a parent should do in this maybe not-so-unusual situation. What’s a parent to do with their child when they’ve got such a disease? The result in the series is, of course, painful to the core. Ashida Mana seems to be made for such roles.

Boy, has she grown since I last saw her. She’s still as good as ever, though you can tell she’s growing and thinking about her acting now. There’s a raw element missing from her Mother days, as if she were really trying to understand her character now. Or maybe she’s just trying to figure out what this type of disease is… I really can’t tell. However, she does great opposite Etsushi Toyokawa, who does his best at dealing with such a situation. They’re fun, regretful… and their interaction nearly agonizing.

One of my biggest issues with the show, or the handling of it, however, was the amount of times I had to hear about the symptoms of Alzheimer’s Disease, how many times we had to tell characters about Kei’s disease. I understand that the story revolved around the reactions of friends and family, but it just seemed rather repetitive in a show with 12 episodes.

In the end, however, Miki Nakatani’s character says it right — Miu’s situation is completely and uniquely her own. Yes, she only has her father who will eventually forget all about her, but Miu’s also got her father’s boss Nakamura-san (Kanie Keizo) and his wife and everyone else in the factory, all of whom vow to and do everything in their power to protect Miu and her right to be with her dad. But would that be the case in real life?