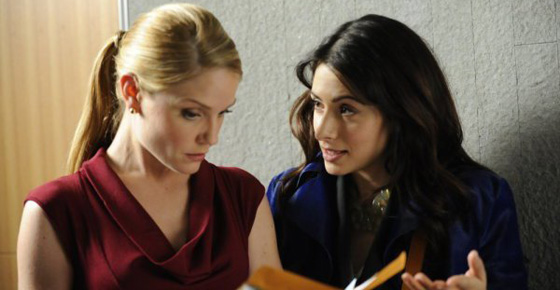 Kudos to Sarah Shahi, from all the people that were watching and recommending the show, at least 70% of them came on board because of Shahi’s involvement in the show.

Canal Studio Universal (in Latin America) is showing the last episode of the season this weekend — if you’re American, you can check the episodes on USA Network, if you really must know.

Fairly Legal is a light drama with bits of comedy that follows Kate Reed (Shahi), a lawyer-turned-mediator of strong will, great people skills, but lousy relationships in her life. She can fix anyone’s problems, but avoids hers at all costs — with a little help from her assistant Leo (Baron Vaughn).

In the first season, Kate is dealing with the loss of her father, as well as her failed marriage to D.A. Justin (Michael Trucco), and the fact that she still can’t accept her father’s second wife, her boss at Reed & Reed’s, Lauren (Virginia Williams).

The shows sets itself up for a promising start with the first three episodes, in which Kate mediates cases that vary from keeping DUIs and “other women” off cases, an innocent man incarcerated for the past 20 years of his life — with a pretty cool performance by Paul Schulze, who we can catch on Nurse Jackie — and a tough love football coach getting sacked, in which we get a sense of what the characters are liked responding to each case differently.

The show reaches a nice peak with episode 4, Bo Me Once, in which Kate is supposed to mediate a problem between a commercial BBQ sauce maker and the owner of the BBQ sauce recipe, which turns out to be a case between a daughter and her abusive father. The ending of that episode had nothing to do with mediation, so it gave the show a nice balance because it was beginning to feel like all the episodes were nicely tied by the end. But that’s it. It reaches its peak in that episode and loses steam from then on.

Though I like Michael Trucco’s acting, his character’s interaction with Kate turns out a little bit boring — a soon-to-be ex-husband and wife that get it on from time to time, which works for Kate, but not for him or us. A similar thing can be said about Kate’s assistant Leo, who doesn’t feel like a real person because we always have to see him in the form of her assistant despite the writers’ attempts to throw in some background love story between him and the sandwich girl.

Kate’s most interesting relationship is with her stepmother, whom she cannot stand — she is The Wicked Witch. Lauren is cold when she’s dealing with Kate, mostly because Kate is also cold towards her — they’re completely different people, but they both clearly miss Reed, Sr. They never try to connect, but they have their moments, especially when Lauren drinks too much scotch and calls Kate on her cellphone.

In a sense, Lauren’s character is even more interesting than Kate, who is obviously dealing with father issues and commitment, but Lauren’s life is going through worse times. She’s managing a law firm and must handle all her spouse’s accounts, get their clients’ trust, and must prove time and time again that she is capable of getting things done — which she is. We probably even judged her in the first episode for marrying a much older man, probably thinking she did it for the money — and begrudging her like Kate does. But Lauren proves to be capable — a little bit cold, but caring.

Also, shooting in Vancouver in place of San Francisco sometimes can get a little distracting. And as much as time-lapse is pretty cool with those city shots at night with the cars passing by and the sun setting, it gets a little tiring as transition and establishing shots.