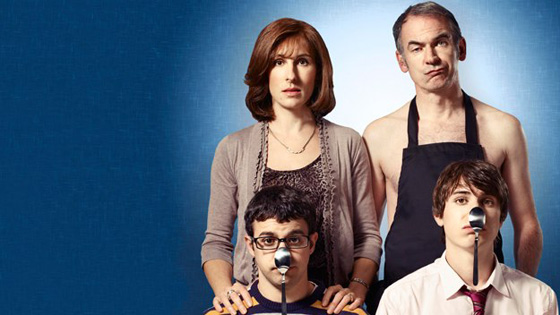 Friday Night Dinner is focused around the experience of a Jewish-English family who share dinner every Friday night. Brothers Adam (Simon Bird) and Jonny Goodman (Tom Rosenthal) visit their parents Martin (Paul Ritter) and Jackie (Tamsin Greig from Episodes) for dinner on Fridays, not because they love them, but they’re hungry and it’s a free meal at their parents’ house as well as honoring their religion’s tradition.

Most of the show focuses on Adam and Jonny, who prank each other at any moment with anything they can get their hands on. The show also features the Goodmans’ neighbor Jim (Mark Heap), who is obsessed with Jackie and tries to flirt with her, but that usually ends up wrong in a funny way. Jim is also accompanied by his Belgian Sheperd dog Wilson, of whom he is irrationally afraid.

Friday Night Dinner kind of starts at a slow pace, but it gradually gets better with each episode. Every episode has something different happening and the comedy gets better for the most part. The highlight of the show is watching Paul Ritter as the father. His character, Martin, enjoys being shirtless around his family and he’s not only socially inept in many ways, but he seems to have a hearing problem and doesn’t pay much attention to things. When he screws up, you’ll hear him shouting his “Shit on it!” catchphrase. All of the characteristics that Martin presents leads to some really funny moments within the show, and Ritter plays the character very well. The main cast Friday Night Dinner boasts is pretty good thanks to the talent involved as well as the screenwriting.

A few things that the show could improve would be in regarding the music editing during the show, Tamsin Greig’s character Jackie getting a haircut (she acts well in the show, but the wig she uses is awful), plus a few tweaks to Simon Bird’s character to make him less similar to the Will McKenzie character Bird played in The Inbetweeners.

They’re a Jewish family, but that doesn’t come into play very often except for them sharing dinner, and the birthday present Adam gets from his father, which can be considered as a very offensive gift to any Jew.

Still pretty good to watch. I’ll be waiting for the second season.