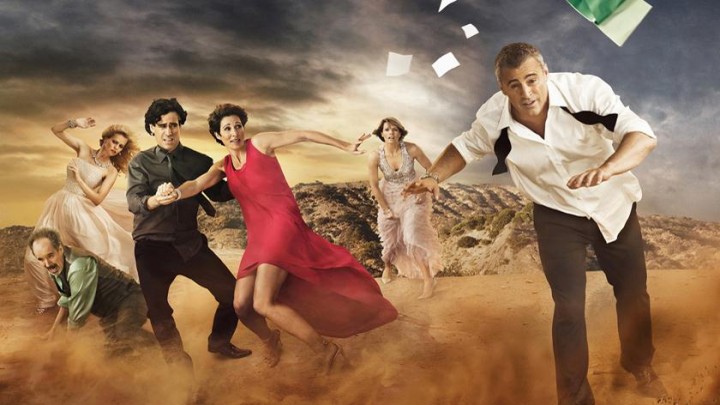 While Season 3 worked for the most part as some sort of purgatory for the characters in Episodes until the demise of Pucks! is confirmed, the season finale had Matt LeBlanc heading towards a new show in NBC while Sean (Mangan) and Beverly (Greig) were finally heading back to London and refusing to work in the States ever again despite a lot of networks dying to develop The Opposite of Us with them, especially agent Eileen Jaffee (Andrea Rosen).

New directions are finally taking shape for Matt and the Brits… until Merc Lapidus (Pankow), in retaliation against Matt for the events that happened in the Season 2 finale, reveals to Elliot Salad (Michael Brandon) that Matt is leaving to NBC, which triggers the production of six more Pucks! episodes and forces everyone into working at it again, including Sean and Beverly, the latter not being amused with returning to the States.

Season 4 not only continues LeBlanc’s downfall — now involving getting screwed by his now-deceased accountant, who stole half of his money, forcing LeBlanc to think about changing his lifestyle to diverse results — but it introduces a new (and highly important) character in the high-spirited and quirky Helen Basch (Andrea Savage), who replaces Castor Sotto (Chris Diamantopoulos) as the new head of the network and has past history with Merc and Carol Rance (Kathleen Rose Perkins). Helen is vital to keep the Brits around the States and develop The Opposite of Us, which also brings up legal problems through Sean’s old writing partner Tim (Bruce Mackinnon), who also wants to run the show given his writing credits for the show despite only typing the script.

The most notable Episodes storyline makes the show go into LGBT territory as the boss-sexual Carol gets busy with the boss, as usual. This time, it’s with Helen. Carol’s new relationship with Helen is something new for her not only in terms of partner genre, but Helen is actually very nice to Carol unlike all of her exes. The chemistry between Savage and Perkins is totally top notch, giving the friendship between Beverly and Carol a run for its money in the best Episodes pairing, and it’s not hard to root for Bance [1] when they’re paired together.

Bance aside, the other highlights seen in Episodes involve LeBlanc figuring ways to keep up his lifestyle, which involves his assets as well as his parents and his ex-wife, as well as the interactions between any combination of Sean, Beverly or Matt. Also, we finally get to see a real Friends reunion (no offense to James Michael Tyler a.k.a. Gunther appearing during Season 2) with David Schwimmer’s cameo that also serves as part of LeBlanc’s money issues storyline.

Showtime has their ways of extending the life shells of their episodes, and Episodes is no exception to their rules. While the show still can bring up the jabs at Hollywood, the Friends references and poke fun at LeBlanc, Season 4 feels kind of tiring to watch, especially when it comes to Sean and Beverly’s stay in the States despite being more powerful and wiser, unlike where they stood in Season 1, as well as watching some of the mistakes the characters make, which feels inferior and repetitive compared to past seasons. I wished we could have seen a lot more of Bance in the second half of the season, which ended being LeBlanc-centric and capped off well his storyline. More Bance sightings would have boosted the season finale’s value as well as Savage’s Helen, whose presence was mostly fresh in contrast to the main cast. If Season 5 gets greenlighted, Helen will be interesting to watch considering where she stands against everyone by the time Season 4 is over.

I’d still keep watching Episodes anyways because of the characters, greatly performed by the cast. Season 4 should have been better than 3 in theory, but the slow pacing and plotting worked against Episodes, lacking a stronger punch to round things up.