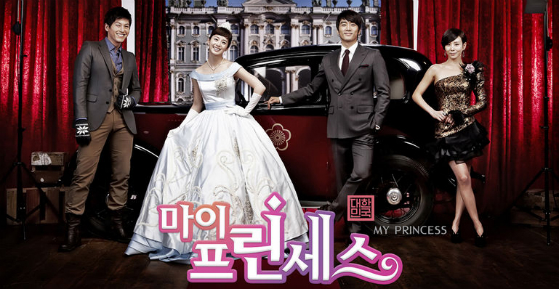 Since I started to fall for Korean entertainment, the name Tae Hee Kim has always been popping up here and there. She is often referred to as “The CF queen of Korea”, a very well-known and loved actress. I have always been curious as to why she is so loved so it was with great curiosity that I started watching My Princess (마이 프린세스).

Before you guys point it out, I know she starred in the very popular drama IRIS. I tried to watch it, but I just couldn’t get into it. I guess action dramas aren’t for me? I watched T.O.P.’s parts in it and I was more than happy with that.

My Princess is another rom-com in where the orphan, Sol Lee (Tae Hee Kim), finds out she is of royal decent. Shocking news that brings on the opportunity of a life time. But the road to the throne proves to be a rough one when you have an extremely handsome diplomat (Hun Seung Song) and a bitchy/icy curator (Ye Jin Park) trying to stop you.

Let me just let out a little sigh here. Again we had some issues with the plot. Aigoo, Korea. How you often have issues with the plot. The drama started off fine, it was cute and the whole idea of a forgotten princess, rightful heir to the Korean throne, was intriguing. If you know your Korean dramas/manhwas, think Goong.

Everything was fine until we got to a block in the road that took up most of the drama, and when we came towards the end… yeah, well, I wasn’t particularly happy with that ending.

Although a bit slow… well, Tae Hee Kim was adorable in it. I can’t say much about her in previous works and compare it to this, but for this one she had the right comedic attitude. I liked watching her and I shall look forward to her future releases.

You can watch it online, legally and with subtitles over at ViKi.com