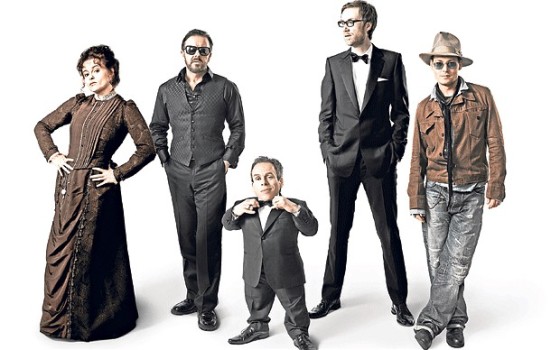 Warwick Davis joins the likes of Larry David, Louis C.K. and Matt LeBlanc, as he plays a fictional version of himself in BBC/HBO comedy series Life’s Too Short, co-created by Ricky Gervais, Stephen Merchant and Davis himself.

Life’s Too Short follows Warwick Davis in his daily life as he remains inactive as an actor. Life for Davis starts to get worse once his wife (Jo Enright) asks for a divorce. At the same time, his accountant (Steve Brody) fucked things up and leaves him with a massive tax bill to pay.

“I want them to see a sophisticated dwarf about town, who carries himself with dignity. I’m a role model. I’m a bit like Martin Luther King.”

In light of his recent problems, Davis tries to pay off the tax debt by agreeing to star in a documentary about his life and career while he visits Ricky Gervais and Stephen Merchant for acting gigs. At the same time, he starts running a talent agency for dwarf actors with his secretary Cheryl (Rosamund Hanson).

Life’s Too Short shares many similarities with the previous Gervais-Merchant television series, drawing from the mockumentary format and use of guest stars as well as storylines, jokes and character writing. While both men have set a pretty high standard for themselves regarding the high quality and humor, Life’s Too Short simply fares alright when compared to The Office and Extras. The novelty of Gervais’ third show is showcasing the life of a dwarf actor in the entertainment industry. However, Life’s Too Short relishes on not only making Davis’s life a living hell, but also making him look like an egomaniac who still believes he’s the shit because he starred in Return of the Jedi, Willow and the Harry Potter films.

Despite Warwick Davis’s best efforts, good physical humor and enthusiasm, it’s plain to see that he’s playing David Brent. Unlike Brent, Davis isn’t really a full-fledged jerk. Somehow the world he lives in gets more and more hostile in the same way it happened to Brent in The Office.

The writing also makes it really hard for the audience to feel any sympathy for Davis, despite a few moments showing him in a good light. Another problem Davis faces is he’s overshadowed by almost all of the guest stars. Case in point, Liam Neeson spent 98% of his screentime interacting with Gervais and Merchant while he attemps to become a stand-up comedian.

The best episode of Season 1 was the final episode, as it had great narrative and steady pacing. By the end of the episode, Davis ends up in a place where he would have never dreamed of, but also gets a moment of redemption.

While not the best show Gervais has created, Life’s Too Short can be very funny at times. Along with the season finale, some of its highlights include Davis riding a Segway to a dwarfs meeting, Steve Brody playing the tax accountant, the weird yet funny Cheryl, and the guest appearances from Liam Neeson and Johnny Depp, the latter having the best shot at a nomination at the 2012 Emmy Awards. Let’s hope Season 2 improves its writing and comes up with better material rather than relying on the guest stars.