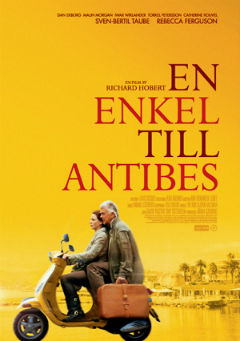 What do you do when your children want to kick you out of your own home, your maid steals from you and old age is taking its toll?

En Enkel Till Antibes is a movie about lost loves, eternal hope and the fact that it’s never too late to turn things around. In it, we meet George (Taube), an old man that lives by himself in his big house. His children Johan (Ekborg) and Susanne (Morgan) want to double-cross him and put him in a retirement home in order to sell his house. They think they have everything in the bag, but their father is not that easy to fool – albeit he is very old. It seems that everyone in this movie is set to double-cross George, yet all he wants is a one-way ticket to France.

The movie is many things in one: partly a family drama, a lifelong search, the story of a romance and also betrayal. You can’t but feel sorry for George as his children try to usurp him, his cleaning lady Maria (Ferguson) steals everything she can get her hands on and he is being haunted by the ghosts of his past. Poor George can only rely on his best friend and neighbor.

When the time is right, they join forces and George runs away from home. As life would have it, Maria has no other choice but to follow George on his trip to France. Along the way they encounter problems as well as other interesting characters, and both George and Maria learn some valuable lessons.

What makes this movie so strong is partly the acting. Evert Taube is one of the oldest and probably finest Swedish actors of today, the way he takes on George, his slight vulnerability because of his old age coupled with his very determined and logical mind. Then, we have Ferguson, an up and coming young Swedish actress with the role of Maria — a very ambiguous one. She is a chameleon, you never know how to define her. She was acting as a character that was acting as another character. It was quite brilliant, although a bit frustrating — she could be sweet as honey one moment and a raging bitch the next.

Rounding out the cast was Torkel Pettersson, playing the very small role of an undertaker/stoner/philosopher/singer. Despite his small role, he managed to steal much of the spotlight. His comical yet deep performance really left an impact on me… which leads me to the second strong point of this movie: the dialogue. The movie had some great one-liners and was filled with memorable quotes — the writing itself was really well done. I am pretty sure this script will make a great book.

I wasn’t blown away but in all I left the cinema very satisfied. En Enkel Till Antibes is a cute movie that manages to make you smile.