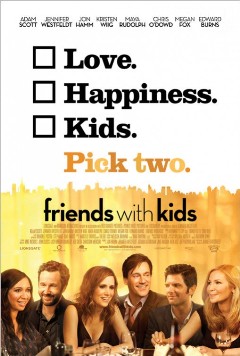 Friends with Kids follows Jason (Scott) and Julie (Westfeldt), best friends in their late 30s who want to have a child. But after watching how their best friends (Hamm, Wiig, O’Dowd and Rudolph) are suffering with the parenting lifestyle that affects their relationships over the course of four years, they are turned off by the ‘couple issues’ their friends have to endure.

After some serious discussion, Jason and Julie agree to have a child together, despite never even having a romantic relationship, and then to date other people while sharing responsibilities.

Will their plan work like a charm? At first, it does. But when they get back into the dating game, things start to change for Jason and Julie, and not in a good way.

Friends with Kids is kind of similar to the likes of No Strings Attached and Friends with Benefits, which dealt with relationships based on sex and ended having problems with clichés that normally plagues romantic comedy films. However, Jennifer Westfeldt’s debut as a film director makes Friends with Kids stand apart from those films in quality thanks to a strong and intelligent screenplay with witty humor, twists and most importantly, character interaction. The conversations that take place in Friends with Kids not only feel fresh and authentic, they also provide food for thought regarding friendships, relationships, and the prospect of becoming a parent.

The supporting cast is great. Jon Hamm and Kristen Wiig go the opposite route of Bridesmaids, as they play a couple that ends up fighting most of the time. Wiig nicely plays a more serious character while Hamm shines as a sex-obsessed asshole. Maya Rudolph and Chris O’Dowd were endearing at playing the couple who still believe in their love for each other despite getting stressed by parenthood most of the time. Edward Burns was great as Kurt, the near-perfect man who ends up dating Julie. And even Megan Fox fits well as Mary Jane, the hot young girl who dates Jason and doesn’t want to have kids at all.

When it comes to the lead actors, Adam Scott and Jennifer Westfeldt worked well together and made their couple look believable. But individually, Scott was much better, as he delivered the film’s best laughs and handled the most intense scenes very well. Westfeldt’s performance was likeable just like her tailor-made character, but her lack of facial expressions ended up being a distraction during the entire film — it sadly reminded me of Kristen Stewart. I really hope she can improve on that aspect because I’m willing to see more of her stuff in the future.

In the end, I really enjoyed watching Friends with Kids despite the final minutes that ends up positioning the film into typical rom-com territory. But Westfeldt’s screenplay and the great acting overrides the film’s flaws.