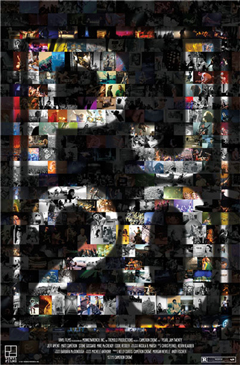 Can you believe it has been 20 years since Pearl Jam was formed and they haven’t dissolved yet? It’s a miracle that four of their original members managed to stay together after all these years.

Pearl Jam’s birth was at the expense of a tragedy. Cameron Crowe explores those early days in Pearl Jam Twenty. He explores Seattle’s musical scene in the late 80’s through interviews with Soundgarden frontman Chris Cornell, Jeff Arment and Stone Gossard.

Both Arment and Gossard used to play in grunge band Mother Love Bone along with singer Andrew Wood. But when Wood passed away, they were in need of a new lead singer. A few days later, Eddie Vedder arrived into their lives and, along with guitarist Mike McCready and original drummer Dave Krusen, the band was born. And six days later — yes, you read right — they were already playing Alive on stage.

The documentary also explores Pearl Jam’s quick rise to fame with debut album Ten, their love and passion for making music as well as playing in front of live crowds, their dislike of commercialism, the showcasing of people that were influential to them, how they survived after grunge’s decline in popularity, their feud against Ticketmaster, shifts in power, dark moments and more.

This is my personal opinion — Pearl Jam Twenty is a fun documentary to watch. Cameron Crowe did a pretty good job in telling the story of the band through rare footage, doing intimate and emotional sit-down interviews with the band members, along with good use of their music according to the Pearl Jam timeline. There’s even comedy moments in the documentary such as the trial against Ticketmaster and a brief story of Pearl Jam’s bad luck with finding a drummer.

However, Crowe’s point of view about Pearl Jam skims through the rest of the years after the Rolskilde Festival accident and ignores how they dealt with their last three albums. Considering that Crowe had access to over 1200 hours of footage, some extra minutes and editing could have helped to tell a more precise story and still remain entertaining. The band members are geniunely nice and cool enough to keep anyone glued to the film from start to finish. Granted, Pearl Jam’s second half of life may not be that interesting when compared to their earlier days, but with tons of footage available to Crowe, there might be something interesting out there about their recent work.

But more than a documentary, Pearl Jam Twenty is pretty much an entertaining love letter from Cameron Crowe to the band. And by the end of the film, it’s very nice and refreshing to see that after such a long time, the guys are still grateful for each other and they still continue to do things their way.