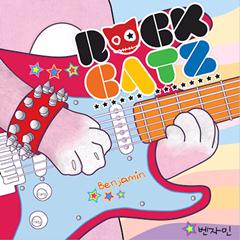 This album has been sitting on the periff of my rock vision since its release in February. Because of seeing the video I was kind of worried that I wouldn’t like them. I finally took the bait and gave it a listen to review it for our dear YAM readers. For the first few songs, the sugery sweet sounds of the lead vocalist completely turned me off.  I can stand some singers with high pitched voices, a prime example being Jung-Hyun Lee, but this is just a little too glitter bubble gummy for me.

At the start of La-Li-La La La she slows things down and proves to me that she does have a lovely singing voice, but picks back up with the chipmunk impressions halfway through the song. The title track Benjamin is actually really well written. I enjoy the up-beat melody and I think the rest of the band works really well together. I might try to get over her high voice if I can because I think there might be something to this band. She finally slows things down for 연애망상 (Love Delusion) and I really do enjoy her voice. Let’s hope that the next time they come out with an album, they tone down the sugar and amp up the rock.

Preview and buy on Soribada | Like it? Buy it on YesAsia