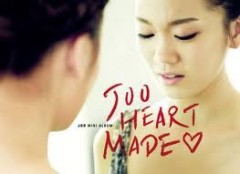 Going back to training because she felt she was lacking, singer JOO is back with a mini-album that is a nice mix between rnb and pop.

I guess the extra training did her good. JOO does have some very pleasing vocals. I find myself drawn to her voice. In the title track, 나쁜 남자 (Bad Guy), she manages to really capture me. I shed a few tears the first times I heard it. It still makes me a bit emotional as I hear it, you can hear real pain as she sings. The funny thing is that the style of the song is made for a singer with a much richer voice, someone with loads of vibrato — think Mariah Carey. Yet JOO manages to make the song completely hers, I imagine Mariah doing it and I guess I could be swept away by her strong voice. I listen to JOO and the clarity of her voice plus the effort she makes, I’m so sold.

Heartmade has a nice pace throughout the whole album. It starts off deep with 나쁜 남자 (Bad Guy), then it amps the pace up some notches with songs 2,3 and 4 to then goes back to a heartfelt ballad with 꿈만 같아 (I Can’t Believe). It’s like the perfect emotional circle.