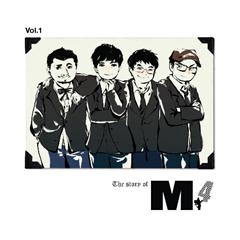 Volume 1 is M4’s first full-length album as a group. They all started out as solo artists and it shows that they all have strong musical histories. With all of the members in their late 30s this group is a bit of a rarity in the Korean pop scene. I’d like to think of them as a little bit Norazo, a little bit Tin Tin Five and something all their own. I love their harmonies, but it’s also great that they each have solo songs so they can all stand on their own.

When you put them together, however, you get beautiful harmonies and powerful ballads. I was so happy to hear the first track of an album start with strong, mature voices and no auto-tune whatsoever.  The album starts with 내 사랑 (My Love), a cute love song, nothing too terribly different.   But if you’re not too sure about their vocals wait until you hit 어쩌다 마주친 그대 (How Did You Come Across), a potent rock ballad with elements of trot.  Se-Jun’s solo 모두 잠든 후에 (After Sleeping) starts off sounding like a church hymn, but slowly builds into a wonderful pop song. My biggest disappointment on the album was Go Go, Won-Jun’s auto-tuned dance piece.

In all, Volume 1 is a very beautiful album and is going to be my go-to happy music album for a while now.

Preview on Xiami.com | Like it? Buy it on YesAsia.com