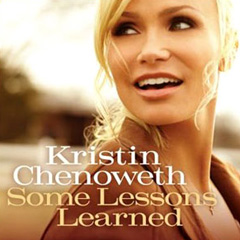 You think you know someone, and then they release a country album.

Kristin Chenoweth, famous for being the little woman with the big voice across various genres — from jazzy pop numbers, big Broadway tunes and Christian music, and let’s not forget perky Olive on Pushing Daisies [1] and tipsy April Rhodes on Glee — is playing the country game with the help of rocking producer, Bob Ezrin, and songwriting queen, Diane Warren, as executive producer.

Fans of country music will be able to enjoy Chenoweth being sassy in numbers like I Want Somebody (Bitch About) — penned by Warren, who also contributes Wreck You, Borrowed Angels, What If We Never and Lessons Learned — and the cheeky I Didn’t, with a chorus that says, “What finally tore our love apart / was a matter of religion / He thought he was God / But I didn’t.”

Chenoweth worked with songs that vary from typical wacky country songs like What Would Dolly Do, which Chenoweth co-wrote about catching her guy in the saddle with some Jolene and telling him to take his truck and shove it, or those about existential things like Borrowed Angels or God and Me where she wonders about all the things she’d tell God if He sat for tea or some homemade pie with her.

The best of the album, however, has to be Wreck You. There’s just something terribly feral about telling someone:

Despite the simple beat, the bass and guitar, the song is simple crossover country fare that works well with Chenoweth’s vocals.

It’s interesting to note that the opening and closing songs on the album are the ones where Chenoweth deals with concrete things the most, like in I Was Here where she talks about wanting to leave her mark on the world to prove that she was here, and in Lessons Learned she talks of the things she’s done, the things she could have done or said, but understanding that she’s gone through them for a reason.

Preview on Xiami.com | Like it? Buy it on Amazon | iTunes (bonus song)