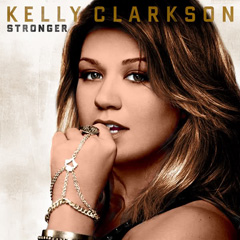 As big a hit All I Ever Wanted was, it felt way too calculated to be an honest Kelly Clarkson record. Sure, it was catchy as hell, but didn’t she just seem so… lifeless, a la Holy Spearit? We banked on Clarkson to be the relatable, girl-next-door personality, the “I’m totally her” persona, real and funny, never compromising herself – that’s exactly what the music industry saw when she played the fierce underdog versus the Wicked Witch of West Hollywood during her tumultuous My December era. Maybe the industry tired her out, and we got a flimsy attempt at being current, and being covered by the cast of Glee (take that as you will).

Thankfully, Stronger rarely meanders around the unsightly pop territory of today’s Auto-tune and gyrating club beats. Instead, little miss Reba comes back in vocal full-force, harkening back to the days when pop music was more accurately defined by pop rock, complete with an excellent band and of course, those golden pipes. She’s grown some country storytelling vibes, and we’re just glad to have her back.

While mid-tempo buzz single Mr. Know It All is a little ditty that teases us with some powerhouse vocals and Clarkson’s real penchant for interpreting great melodies, Stronger takes a stronger influence from its title track. A sure shoo-in for single status, What Doesn’t Kill You (Stronger) is more accurately what our #1 Idol is all about, growly female pop rock any girlfriend or sister or gay best friend would sing in the shower. The bratty calculations of Einstein pumps up the overly clichéd math=love over pop sensibilities that it comes out a convincingly upbeat material – “I may not be Einstein but I know dumb plus dumb equals you!!!”

The requisite pretty ballads aren’t gross in the slightest; this is not a sad repeat of the cheesy balladeering of Clarkson’s debut. Standing in Front of You is a light guitar-driven number, awash in echoes and harmonies so pristine, while Breaking your Own Heart is a country-tinged lament, delivered so beautifully that placing it as the closing track really just amplifies the lyrics. It’s the emotion that Taylor Swift will never be able to deliver. And she should be glad to concede because Clarkson is, quite simply, in a category all on her own – oh, Miss Independent, we missed you so.