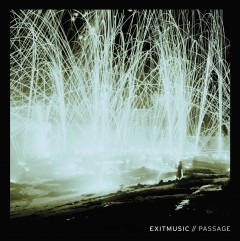 When was the last time the exit music to a movie struck you right at your heart?

Mine was Bjork’s New World [Xiami] from Dancer in the Dark. It so poignantly but truthfully crystallized the essence of Selma’s (played by Bjork) “Keep your faith in life till your very last moment” spirit.

Apparently, this is what the Brooklyn-based duo, Aleska Palladino and her husband Devon Church, seeks to achieve with their music as well: to get through the dark and gloomy side of life by confronting it up close and personal. And thus the “Passage” — whether it leads you to eternal happiness or infernal sufferings, that’s all up to you.

In terms of discography, Passage is Exitmusic’s debut LP album, preceded by their self-released The Decline of the West (2007) and the EP From Silence (2011), which has been positively received both by critics and tasteful non-mainstream music lovers by and large. Their defining sound, as is evident in Passage, has the reminiscences of a few iconic figures in the Music Hall of Fame. The one thing that instantly caught my ear was Aleska’s ethereally heart-rending vocals that resemble the angelic qualities of Elizabeth Fraser’s (Cocteau Twins) — but more in the mezzo-soprano to alto range, as opposed to Liz’s pure soprano rendition. In The City and Storms, for example, there were moments here and there that I almost felt like I was listening to Dolores O’Riodan (The Cranberries) singing Daffodil Lament [Xiami] and Empty [Xiami] (respectively, in that order) from No Need to Argue (1994), but in a more agitated and unsettling mood. A voice of rarity in the current music scene, this forms the basis of the duo’s dreamy rock infused with indie electronic sound.

And The Cranberries connection doesn’t just end with the vocals. Musically, the arrangements of The Modern Age  and The Cold bear slight traces of No Need to Argue‘s Twenty-One [Xiami] and Put Me Down [Xiami] from Everybody Else Is Doing it, So Why Can’t We?. [Xiami] It is “slight”, though, because Exitmusic has put a very smart spin on them both, intermixing them with their other specialty — an eclectic electronic sound that evokes déjà vu with triphop Portishead and even Sinead O’Connor in Nothing Compares 2 U [Xiami] in the leading roles every now and then. The O’Connor reference is especially true of Storms and The Wanting.

Now, the title track, Passage. Compared with the creative and relatively more original edginess as demonstrated in, say, The Following Winds from The Decline of the West, Passage is every inch an important “passage” that the duo has decided to go for at this point of their career. With The Following Winds, Exitmusic succeeded in integrating the tunefulness of the melody with a daring and uncompromising arrangement that triggers sentiments of misery, mystery, and tragic beauty. With Passage, however, tunefulness has obviously had a landslide win over the Exitmusic edge: the way the accompanying music is arranged is no doubt modeled on The Hours [Xiami] from their EP From Silence, the overnight breakthrough single that has opened so many doors of opportunity for them over the past year. Not that this is a bad thing… just that for a title track of a debut LP album, I expected to hear something that better characterizes the origin(s) and unique strength(s) of their music.

Hopefully, this Passage doesn’t signify the duo’s exit from the prototypes and roots of their own music.