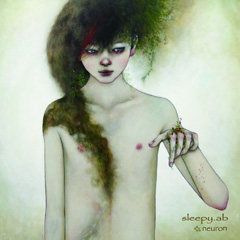 What holds true for literature is just as pertinent when it comes to music: everyone sees the cover first. If a band just so happens to have a brilliant one, any curious passerby will instantly be intrigued enough to listen. Hokkaido band sleepy.ab took that logic and gave us the hauntingly abstract cover for their latest album neuron.

sleepy.ab has a sound not unlike Radiohead, perhaps Nirvana at Cobain’s most introspective, or even the softer side of Hyde (think Evergreen). They couple the psychedelic dreamlike warp of their compositions with a delicate vocal. While Cobain and Hyde’s vocals have a darker edge, lead singer Nariyama Tsuyoshi (成山剛) errs on the side of airy, almost breathing into the lyrics and wrapping listeners in warmth.

neuron opens much like the cover itself: abstract (as in the silent “ab” in the name) and full of mystery. We’re put into a dream state as soon as the first few twisted notes warble through the speakers. The band then opens us up to something quite surreal with track euphoria. And that’s exactly what the song is — a sort of euphoric meltdown of our senses, leaving only our ability to feel. The opening track leads into the mellow haze of track Hamelin and sets the tone of the rest of the album.

The album continues in that same vein, smooth vocals and soothing instrumentation. At some point I expected the album to thrash and wail, to move from lilting lullabies to sinister darkness many albums of this same ilk tend to morph into. But the warmth of the compositions and Nariyama’s soft vocals don’t seem to lend themselves to angst and rage. However, neuron’s soothing atmosphere is misleading, giving you a false sense of serenity. Songs like undo and darkness don’t exactly rage, but they sort of creep under your skin, exposing the raw nerve of the soul.

Though neuron is more 60s smooth rock than 90s grunge, there’s a complexity here that belies the gentle nature of the music. The album runs a very high risk of being too soothing, too smooth for those looking for a little more shriek in their alt-rock. It’s a soft album, both vocally and in composition. But neuron displays an abundance of texture. Tracks like Parable and lump are layered and complex — the former opens with boots crunching through snow and leads into a multifaceted track that’s both sweet and meticulous. Then tracks like Andromeda and lost just push you into a different dimension, propelling the sound to a visceral level and allowing you to feel as if you’re one with the stars.

sleepy.ab certainly lives up to its namesake. The sort of sleepy composition of the band’s music lends itself perfectly to a feeling of abstract detachment from the world around you, a feeling of becoming one with the atmosphere that silently wraps you in intoxication. neuron is the perfect rainy Saturday album. It starts out hazy, as if you’re slowly drifting out of sleep, then melts the gray with soft summer rain. It’s the sort of album you put on to relax your muscles, to massage away the tenseness of the workweek, allowing you to revel in the comfort of soft sheets and a cool breeze.

You can listen to neuron on Xiami or sleepy.ab’s Bandcamp page. You can also buy the album on Bandcamp and iTunes.