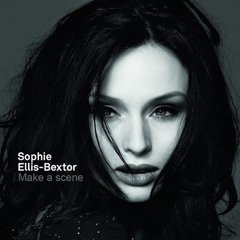 Make a Scene is all you need to know really — I’m talking about the title track of SEB’s fouth album, as produced by England’s wonky dance-guitar scenesters Metronomy. A kitchen sink of roller rink rhythms and brassy noodling, the song flits between dirge and disco with aplomb, and it’s quite unlike anything else on the UK pop scene.

Shame, then, that the rest of the album manages to sound like everything else made between the 1970s and 90s, and I’m not just talking about genres either. Every song here seems to lift a melody from something or other, making the whole thing too much of a déjà vu overload for the system, meaning it’s really hard to concentrate on the particular merits of a song when you spend most of its run time wondering, “Now where have I heard that before..?”

As with most pop albums, it’s just best to cannibalise the package for potential singles, and there are a few — the euphoric Bittersweet, anthemic Heartbreak, synthy Off & On (though its Calvin Harris remix works much better). Even these particular nuggets suffer from a particular nagging feeling though. Also, like Kelis last year, Bextor’s consciously decided to make a dance album, but instead of trying to ‘nail’ a few particular sub-genres, Make A Scene jumps around too much with varying results, going from disco & electro to undercooked house.

There’s too much tepid and trancey crap like Not Giving Up on Love and Can’t Fight This Feeling, and by their titles alone you can sense how much imagination went into them, Christ. Come on, Sophie. You can’t set out to be a nu-disco goddess queen and then turn in some rent-a-voice production best suited for the wee hours at one of Ibiza’s many shit holes. You just lose all identity, going from gaunt and classy to classless and dull.

Now please, get back in the studio with Metronomy! You used to be rather indie, remember?