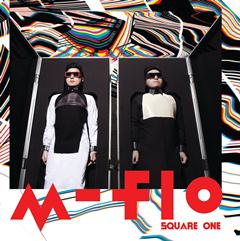 To be completely honest, I was feeling initially nervous to listen to this album after my wholly negative reaction to Verbal’s solo release. When I listened, I was dismayed that they had gone with the same theme of electric beats and heavily mixed sounds. However, I realized something part way through my first listen of the album — m-flo has always been telling us a story which each album. They reinvent themselves to present their audience with a new style on each album, so if you’re going to remain an m-flo fan, you need to be able to adapt to the changes.

So my first listen was not favorable, and I thought I was going to hate it. Then, I took another listen about a week later, keeping the thought in mind that this was an electronic album, not a hip-hop/jazz fusion album. This time it blew my mind. I found myself beboping to the amazing mix of trance, dub-step, house and electronic beats. Taku and Verbal have really out-done themselves this time.

From start to finish Square One is a dance party I want to invite all my friends to. One of the best songs on the album Sure Shot Ricky, is a powerhouse of a dirty drum and bass track. Yesterday starts off slow, and has the familiar m-flo feel, but then breaks down into a progressive dance track about half way through. It’s these little innovations that m-flo has produced on this album that keep me coming back for more (the album already has over 10 plays on my iPod).

I could gush more, but I think I’ve already made my point – Square One firmly sets m-flo back on the map in Japan, only this time they’re looking to conquer the electronic music scene more than the hip-hop one. Be sure to check out the album, as it’s not one to be missed.