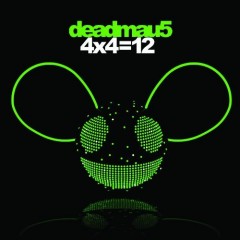 In a sea of cyclical, overproduced, heavily autotuned club jams masterminded by one man (I see you, RedOne), Toronto-based progressive house producer deadmau5 is a great musical sigh of relief. Placed beside modern Canadian acts Drake, Justin Bieber and what looks to be a Shania Twain comeback, deadmau5 (born Joel Zimmerman) is a local export many Canadians are proud to call their own. Readily so, because 4×4=12 is tailor-made for the club experience, without being repetitive – it’s all about the beats and the bass, and in light of robo-Spears: the bass is definitely bigger.

4×4=12 isn’t a singles album, that’s for sure. It’s a pulsing collection of club tracks, all of which sound better in the dark and in various states of inebriation. The exhilarating electro house of Some Chords is an amazing album opener, complete with subtle, but affecting, dubstep wobbles. Dubstep and electro hip-hop meet on the aggressive One Trick Pony, while the haunting Raise Your Weapon soars as a synth-heavy dance ballad. Featuring pristine vocals from Greta Svabo Bech (singer for Liverpool band Picture Book) and a grimy-ass dubstep breakdown, it’s 4×4’s most thrilling track. Mr. Zimmerman is really bringing his dubstep A-game to the club culture that has just started embracing it.

There are a few straightforward house tracks satisfying those not looking to dive deep into deadmau5’s newer UK electronic influences. Animal Rights, produced with Grammy-nominated electro musician Wolfgang Gartner, sounds like a Daft Punk record (a throbbing compliment!), with the dubstep wobbles 4×4 is peppered with. And the Michael Woods Remix of I Said is a standard club track, soundtrack to the dizzying lights of nightlife.

To fully appreciate 4×4=12, it has to be listened to in the proper context – at a dark party, during a wild pre-game, or a particularly intense workout. It’s difficult to pick and choose any one track, as the record carries a stirring electronic timbre that builds track to track. Highly recommended for house fans, or those looking for something deeper in the dance-pop world, because deadmau5 certainly delivers some big fat, drop dead beautiful bass.

Preview it on Xiami.com | Like it? Buy the album on Amazon.com | iTunes