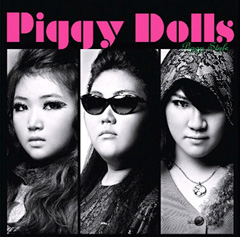 In a world filled with rail thin idols competing with one another to have the best “s-line,” a refreshing new group has debuted in South Korea. Piggy Dolls is a three-member vocal unit that makes most of the girl groups out today sound like singing chipmunks. Reminiscent of Big Mama with a touch of 2NE1’s flavor, I find them absolutely fascinating.

The video for their debut single Trend starts off with them gobbling food and watching TV. This has offended some people, but they have to realize that they’re making a statement about how obesity is viewed in society and they break into their song that sings about confidence and believing in who you are despite being different.

I believe these girls have a bright future ahead of them if they play their cards right. There is a little too much auto-tune used in the intro to the album, but I appreciate the fact that they don’t use it much throughout the rest.   Trend is a catchy dance number that gives us a taste of their vocals and actually had me wanting to hear a ballad. I was fortunate to have my wish granted with It’s Not. The song starts with just piano and their voices, which is great because it highlights how strong they are vocally. You Know is a great mid-tempo song that blends the harmonies of Jiyeon, Min-Sun,  and Ji-Eun very well.

I’m glad LOEN Ent. took a chance on these girls because the K-Pop scene is ten times better with voices like these in the mix.